Powered by Canadian fuel cells, the Coradia iLint is expected to carry its first passengers in Europe next year 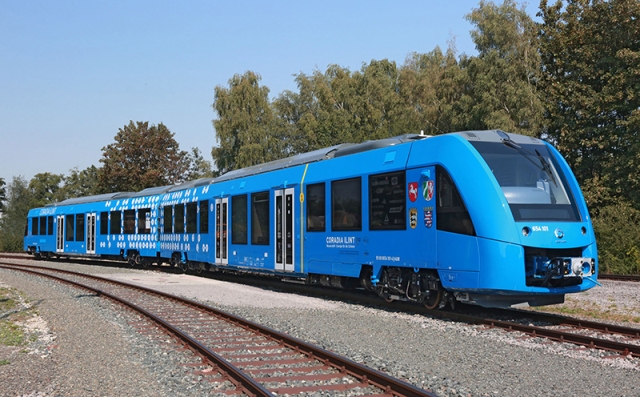 The hydrogen-powered train can travel up 800 kilometres on a single “tank” and reach speeds of 140 km/h. PHOTO: Alstom

SALZGITTER, Germany—Leaving just steam and condensed water in its wake, the world’s only fuel cell-powered train throttled up to 80 kilometres per hour this week during its first true test run in central Germany.

European train maker Alstom unveiled the fuel cell-powered Coradia iLint at the InnoTrans rail industry trade fair in Berlin last fall and plans to have the hydrogen train carry passengers for the first time next year.

Tuesday’s 80 km/h circuit at the company’s Salzgitter, Germany test track marks the start of a month-long testing period for the train. Engineers will be watching the vehicle’s energy supply system to ensure its drive, fuel cell and battery systems interact properly. They’ll also put the train’s brakes to the test.

The Coradia iLint is based on one of Alstom’s diesel models and uses fuel cells made by Canada’s Hydrogenics Corp. to generate electrical power for traction. It also has lithium-ion batteries on-board to store unspent energy.

Later this year, Alstom plans to put the Coradia iLint through its paces in an extensive test campaign that will take it across Germany and the Czech Republic, as well as up to its maximum speed of 140 km/h.

If all goes well, the rail firm will hold passenger trials in Germany next year.

The train can travel 600 to 800 km on a single “tank” and is designed replace diesel locomotives on regional tracks where electrification is too expensive.

Currently, Alstom says it’s getting the hydrogen gas used to power the train from an industrial source, where it’s produced as a waste product. In the long term, however, the company hopes to see the gas made at wind farms using electrolysis, which could be done without releasing any harmful emissions.

Like electric vehicles, which are only as clean as the electricity used to charge them, fuel cells are only carbon-neutral if the hydrogen they use is produced without creating emissions.