First hydrogen-powered train takes to the rails in Germany 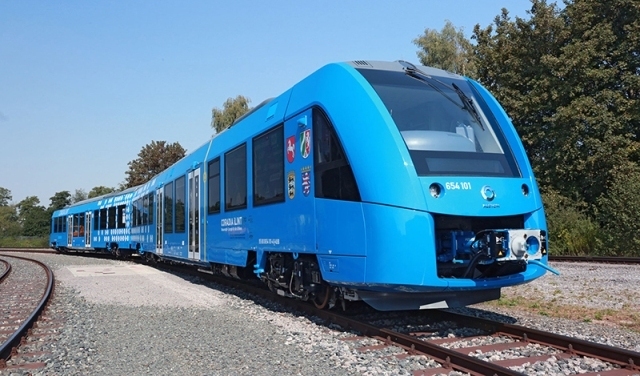 Premiering the zero-emissions vehicle at the InnoTrans rail industry trade fair in Berlin last week, the company said the Coradia iLint can travel at speeds of up to 140 kilometres per hour, carry 300 passengers and range 800 kilometres on a single “tank” of hydrogen—putting it on par with the regional diesel trains it’s designed to replace.

“Alstom is proud to launch a breakthrough innovation in the field of clean transportation,” Henri Poupart-Lafarge, Alstom’s chairman and CEO, said in a statement.

“It shows our ability to work in close collaboration with our customers and develop a train in only two years,” he added.

Using one of its popular diesel trains as a jumping off point, Alstom retrofitted the old design with state-of-the-art technology. At the core of the new train is a hydrogen fuel cell built by Canadian cleantech firm Hydrogenics Corp.

“We are very excited to be working with Alstom Transport and provide the hydrogen fuel cells that power the Coradia iLint,” Daryl Wilson, the company’s CEO and president, said.

Valued at as much as 50 million euro, Hydrogenics signed a development and commercialization agreement with the French train maker last year. The deal will see the Canadian company build at least 200 engine systems for the new hydrogen-powered trains over a 10-year period.

Along with the fuel cells, the new train includes lithium-ion batteries to store energy that isn’t immediately put to use within the train and an energy management system to ensure power is dispersed efficiently throughout the vehicle.

While many rail lines worldwide are now electrified, the Coradia iLint targets regional tracks where electrification is either too costly or impractical. Working to address the same dearth of electrical infrastructure, Montreal-based Bombardier Inc. recently received $5.9 million in funding from the German government to develop a train capable of running at least partly on lithium-ion batteries.

The first commercial versions of Alstom’s new hydrogen train are expected to enter service in Germany in 2018. The company plans to build the train at its Salzgitter plant in the European country’s Lower Saxony region.