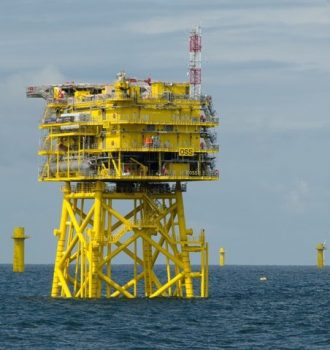 TORONTO—Canada’s renewable energy developers have been soaring all year—but few of them are flying higher than Toronto-based Northland Power Inc.

Earlier this week, the company reported its 2016 second-quarter earnings, posting a revenue increase of six per cent over the same quarter last year, as well as a 21 per cent increase in profit. As the clean energy sector takes off, the company’s shares are trading near their all-time high, up more than 30 per cent year-to-date.

Construction on the company’s two largest under-development projects—the 600 megawatt Gemini wind farm off the Netherlands coast and Nordsee One, a 332 MW North Sea wind farm off Germany—are progressing and are both scheduled to come online before the end of next year.

“We achieved significant milestones on both offshore wind projects, continuing at a rapid pace with over 90 per cent of the total wind turbines installed at Gemini, and installation of the offshore substation for Nordsee One successfully completed last month,” the company’s CEO, John Brace, said. “These results demonstrate our ability to balance strong returns with steady growth.”

With the success comes potential change. The Canadian company may be looking for a buyer.

Northland announced it would be conducting a strategic review in July, a move that led speculators to begin snapping up shares. Often, such assessments mean a company may be exploring buyout opportunities, though the company has said it will not comment on the process until it is complete.

Meanwhile, Northland said it continues to pursue natural gas, wind, solar and hydro projects worldwide. The company said it has expanded its early-stage development pipeline in Canada, the U.S., Europe, Mexico, and Taiwan over the past three months.