Four customer aircraft have entered final assembly at Bombardier’s site at Downsview Airport. The company says it’s on track to deliver the first Global 7000 jets, designed to be the industry's largest and most luxurious, in the second half of 2018 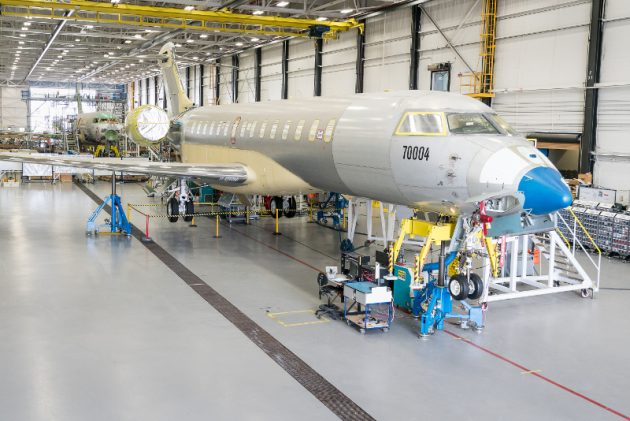 The Global 7000 reached Mach 0.995 during a flight test in March. PHOTO: Bombardier

MONTREAL—Bombardier Business Aircraft, the business jet division of the aerospace giant, announced July 17 that its Global 7000 aircraft is on track to enter into service in the second half of 2018 as planned.

Four of the jets are currently in final assembly at the company’s facility in Toronto.

Bombardier’s Global 7000 is designed to be industry’s largest, most luxurious business jet. It will become the first and only jet to offer four distinct onboard living spaces.

To build the new jets, a state-of-the-art assembly line has been built at Bombardier’s Toronto facility. The company installed a laser measuring system which uses spherical mirror reflectors to guide the plane through the entire assembly process.

The laser system works as part of the Aircraft Transportation Linear Automated System, or ATLAS, a system which can move partially-finished vehicles from one position to the next within the facility in approximately three minutes—a process that could take as long as eight hours in the past.

Two robotic drills have also been added to the assembly line, accurate to within less than one thousandth of an inch.

Bombardier also announced its flight test program for the aircraft has surpassed the 500-hour milestone.

The flight test program currently has three flight test vehicles (FTVs) in testing, and two remaining FTVs are on track to join the other aircraft at Bombardier’s flight test centre in Wichita, Kansas.

“The three flight test vehicles have been meeting all performance and reliability expectations for this stage in the flight test program, and the pace of testing will continue to accelerate with the two remaining FTVs progressing well towards their respective first flights,” said Michel Ouellette, senior vice president, Global 7000 Program.

Flight testing for the Global 7000 began in November 2016 and in March of this year an aircraft reached Mach 0.995, becoming the largest business jet to operate so close to the sound barrier.