Trophy will be presented to winner of Canadian Grand Prix in Montreal, F1's only stop in Canada

VALCOURT, Que.—BRP Inc. has unveiled the trophy that will be presented to the winner of the Formula 1 Canadian Grand Prix in Montreal this weekend—the fourth iteration in as many years designed and produced by the company.

The 2014 trophy was created by a trio of BRP designers, including Canadian Ghyslain Béland, and was intended to evoke the aerodynamic lines F1 is famous for.

The trophy’s clear glass cup was shaped as an abstract form of the Canadian maple leaf, while the three precision-built arms are intended to look like a perfect driving line on a race track.

Finally, the prongs feature an air intake shape like those found on F1 cars.

The trophy started as a digital design before being machined from raw materials and handcrafted in Quebec.

The team won their chance to create the trophy following a friendly competition within BRP’s Design & Innovation Centre in Valcourt, Que.

“Unique in Quebec, our cutting-edge Design & Innovation Centre gathers together first-class designers from all over the world,” senior vice-president of design and innovation Denys Lapointe said in a company release.

“A project such as creating, developing and producing the Formula 1 Grand Prix du Canada trophies allows BRP designers to stimulate their creativity and show their versatility.” 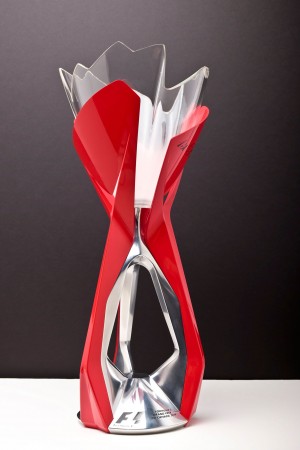 The trophy presented to the winner of the 2014 F1 Canadian Grand Prix in Montreal. PHOTO BRP