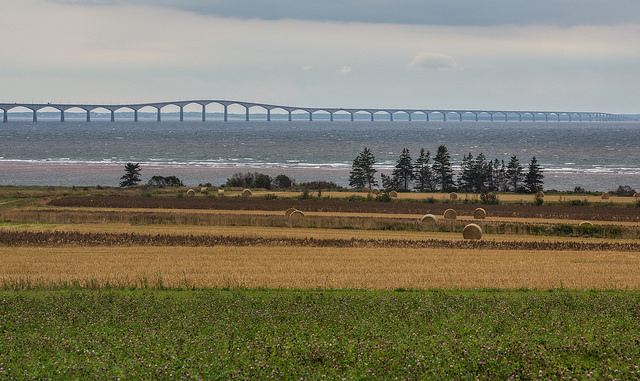 A farm on Prince Edward Island. Confederation Bridge linking the island to the mainland in the background. PHOTO: Tony Webster/Flickr

OTTAWA—Bryan Maynard says his grandfather, a Prince Edward Island potato farmer, didn’t start talking about retirement until he was 80 years old and had been diagnosed with dementia.

At that point, with no succession strategy in place, Maynard and his brother suddenly had to scramble to find a way to keep the farm in the family and just barely managed to do so.

The 33-year-old’s situation is not uncommon. A growing number of farmers are nearing retirement without having formally planned for their successors, putting the next generation of small-scale farming at risk—something Maynard and advocates are urging farming families to think about.

“Our grandfather didn’t really want to talk about selling the farm, ever, until it was too late and he had to,” Maynard said.

A Statistics Canada study found last year that the average age of Canadian farmers had reached 55 after rising for decades, and 92 per cent of farms had no written plan for who will take over when the operator retires.

It also found there were more farmers over age 70, than under 35.

Christie Young, of Guelph, Ont., is trying to tackle that issue with Farmlink, a matchmaking service she runs for farm owners and prospective farmers across Canada.

She has found there’s no shortage of young people armed with business plans who want to get into farming, and older farmers who want to see their land farmed by a new generation when they retire.

The problem, she said, is that many farmers have become heavily leveraged in recent decades, having borrowed against the rising value of their farm properties—which spiked nearly 40 per cent per acre on average between 2011 and 2016, according to Statistics Canada.

That means farm owners need to sell their properties for full market value in order to retire, said Young, so the only buyers tend to be large agricultural operations consolidating farmland in rural areas or, if the farm is in the shadow of a city, property developers.

“If you’re a new farmer who’s trying to buy a piece of land and pay for it by working the land, it’s almost an impossible proposition,” she said.

Young uses Farmlink to help farm owners and young farmers set up partnerships that begin years before the owner’s retirement, such as lease-to-own arrangements that can allow a new farmer to start small and expand.

“The problem is that’s not how building farms has happened in the past—we don’t have a whole lot of history with agriculture, we only have 200 years—and the transition between generations hasn’t looked like this before,” she said.

A successful farm transition tends to require time and planning, so when a farmer comes to Young wanting to sell his property to a new farmer for $5 million by next weekend, she can’t help, she said.

In Maynard’s case, when his grandfather suddenly needed to retire in 2015, he and his brother bought 70 per cent of the farm. They’re successful today, but Maynard said they’re exception to the rule.

He said they just managed to get a loan, secured with a parcel of land that had been willed to them by their father and the financial backing of their mother—assets that aren’t available for most.

“It’s not the way Canadian agriculture should be doing things,” he said. “It’s just tough to see family farms dwindle up and go the way of the dinosaur just because of the lack of planning and lack of resources available to young farmers to help them get off the ground.”

Statistics Canada has, however, identified a small sign of change, finding the number of farmers under age 35 had increased slightly from 2011 to 2016, reaching almost 25,000, with a marked increase in the number of farms run by young women. It’s the first growth in the under 35 demographic since 1991.

Brenda Hsueh attributes some of that growth to a recent trend of many young farmers being motivated by a passion for small-scale organic farming and local food.

She took an unconventional path to farming, buying property in Grey County, Ont., in 2009 at age 33, with funds from the sale of her Toronto condo, which she had bought while working in the financial services industry.

Hsueh was trained to farm by the Collaborative Regional Alliance for Farmer Training in southwestern Ontario, a network of small-scale organic farms that offer internships.

But Hsueh said most of the younger interns she met can’t afford the price of entry to farming today.

That’s why Young said she’d love the federal government to focus more of its farming support on young farmers, rather than on the economic viability of farming in general, fearing that without a change, there will be no more small family farms.

“We’re losing them,” she said.

Agriculture and Agri-Food Canada said the federal government provides funding and loan support to some young farmers, including loans for farm transitions that allow for deferred payments and interest-only payments.

“We are continuing to explore ways to support the next generation of farmers in starting up and transferring farms,” the ministry said in a statement.

Statistics Canada’s research shows the overall amount of Canadian land being farmed has remained relatively stable over decades, as farms have consolidated to become larger, and the number of farmers has fallen.