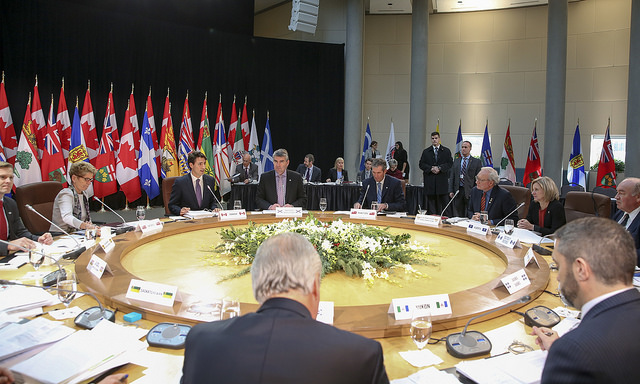 Canada’s premiers met in Ottawa last December. The inter-province trade deal was among the many issues addressed. PHOTO: Premier of Ontario Photography/Flickr

EDMONTON—Cross-border trade and the looming renegotiation of NAFTA top the agenda of the upcoming summer gathering of Canada’s premiers, says host Rachel Notley.

Notley says the premiers will hear from Canada’s ambassador to the United States at the meeting of what is known as the Council of the Federation.

Negotiations are set to begin next month on a re-working of the tripartite 23-year-old North American Free Trade Agreement.

U.S. President Donald Trump’s administration formally gave notice in May it wants to renegotiate the deal, labelling it obsolete and unfair to American workers.

Trade between Canada and the U.S. is pegged at $600 billion. Prime Minister Justin Trudeau and other premiers have been working with state governors to build cross-border support for the deal.

“We’re not afraid to have NAFTA looked at and negotiated but I think it’s important that it doesn’t drag on,” said McNeil. “We need to make sure investment confidence is still high.”

Premier Wade MacLauchlan of Prince Edward Island said: “We have been the beneficiaries of a growing export economy and intend for that to continue to be the case. We are absolutely for the maintenance of NAFTA and the importance of that trading relationship.”

New Brunswick Premier Brian Gallant said he will talk NAFTA, but also for opportunities beyond the continent.

“There are opportunities with the comprehensive economic trade agreement between Canada and the European Union and certainly opportunities to see some of the growth in the Asian markets,” said Gallant.

Manitoba Premier Brian Pallister wants to address domestic issues as well, including the growing number of refugee claimants crossing into Manitoba from the United States.

“I am going to reiterate our call for increased federal partnership and federal resources to improve the processing of asylum claims, for example, (and) to call on the federal government to work with affected provinces and territories to develop a long-term strategy,” said Pallister.

Ontario Premier Kathleen Wynne’s office said her priority is trade with the U.S., but she will also discuss infrastructure spending and pharmacare.

Dwight Ball, the premier of Newfoundland and Labrador, said he will solicit ideas on job creation, infrastructure investment, skills training and health-care innovations.

Quebec Premier Philippe Couillard is expected to speak to his counterparts about his recently released constitutional initiative.

The document outlining Couillard’s thinking about Quebec’s place within Canada is entitled “Quebecers: Our Way of Being Canadians.”

He has said the goal of his government’s proposal is to “start a dialogue” he hopes will eventually lead to the reopening of constitutional negotiations and to Quebec finally signing the 1982 Constitution.

B.C. premier-designate John Horgan will not be attending. He is being sworn in on Tuesday. The province is sending government staffers.

Other issues on the agenda include plans to regulate the legalization of recreational cannabis use on July 1, 2018.

The provinces will be responsible for implementing regulations on cannabis use, including where and how it is sold, whether the legal age should be higher than 18, keeping roads and workplaces safe, and keeping marijuana out of the hands of children.

Notley said provinces will also discuss the fallout from the Supreme Court’s year-old decision in the landmark Jordan case, which delivers hard deadlines to bring criminal cases to trial. More than 200 cases have already been tossed out due to unreasonable delays.

The Council of the Federation will meet on Tuesday and Wednesday.

On Monday, the premiers are to convene with Indigenous leaders, but that meeting is up in the air.

Three of the five First Nations groups announced on Friday they will boycott the meeting, because they believe they should be part of the full Council of the Federation.

The Assembly of First Nations, the Metis National Council and the Inuit Tapirit Kanatami have said they will instead hold a news conference in Toronto on Monday.