by The Associated Press, with files from Alexander Panetta, The Canadian Press  April 23, 2018

The Mexican president spoke about the deal at a trade show in Germany, saying the new pact would ensure benefits for all member nations. Meanwhile, negotiators are racing to get a deal done 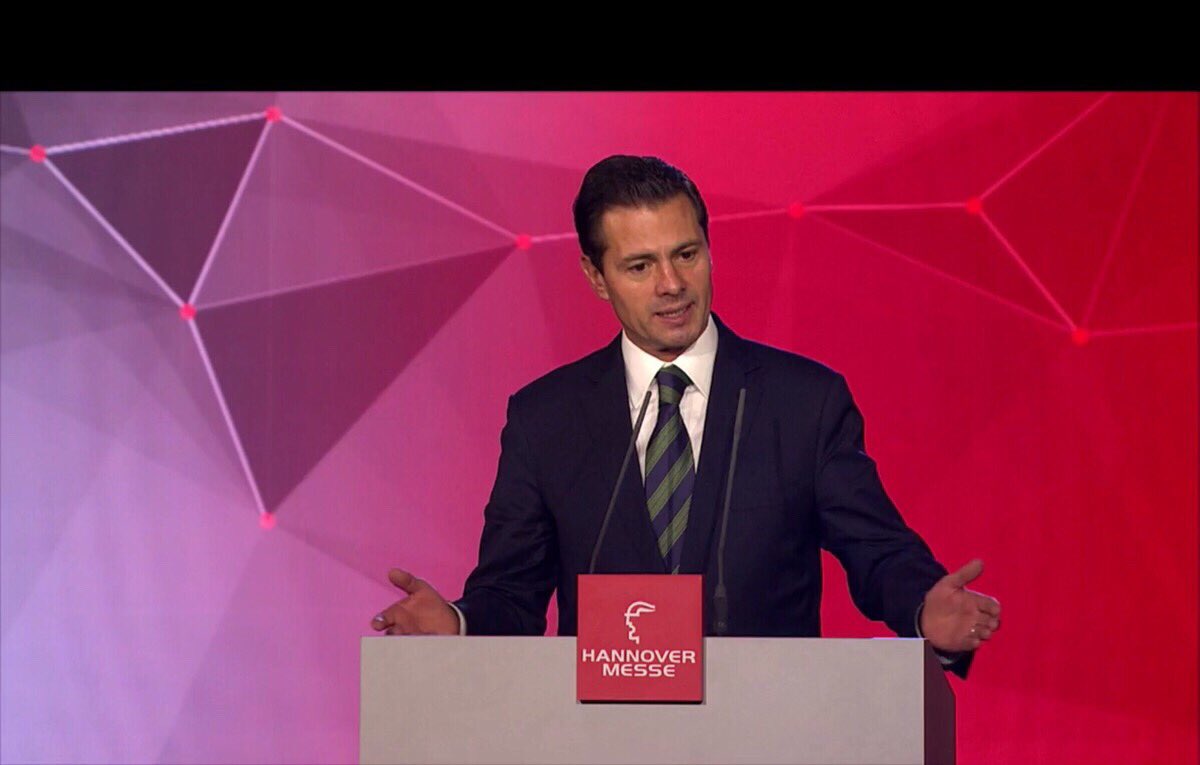 BERLIN—Mexico’s president has said at a trade fair in Germany that he’s optimistic about reaching a deal to overhaul the North American Free Trade Agreement.

Both welcomed a preliminary agreement reached Saturday between the European Union and Mexico to update their nearly 20-year-old trade deal.

Mexico faces a challenge with the United States and Canada in overhauling NAFTA. About three-quarters of Mexico’s exports go to the U.S.; roughly half its imports come from there.

Pena Nieto said: “We have optimism, as well, that we’re going to be concluding the renegotiation (and) modernization of the North American Free Trade Agreement … ensuring benefits for all its partners.”

Sources familiar with the NAFTA talks say the sides are finalizing rules on auto parts; are still far apart over dairy, public procurement, and pharmaceuticals; and are likely inching toward a deal that will pare down the controversial dispute mechanism under NAFTA’s Chapter 11 that lets companies sue governments.

”You can call this a perpetual negotiating round,” Canadian Foreign Affairs Minister Chrystia Freeland said.

”We have had some very energetic and productive conversations.”

She and her Mexican colleague are both rejecting the idea of deadline pressure, insisting there is no requirement to get everything done by some specific date: ”It will take as long as it takes to get a great win-win deal,” Freeland said.

But the Trump administration has political reasons to hurry. There are just weeks left to meet the legislative deadlines for ratifying a deal in the U.S. Congress this year.

The administration is keen to have the agreement voted on during the current, friendlier, Republican-led Congress, as polls show a potential transfer in power after the November midterms.

The White House has been weighing different hardball tactics to force Congress to move quickly on ratification and one involves a dramatic threat to cancel the existing NAFTA if lawmakers don’t approve the new one.

That carrot-and-stick tactic would be extremely high-risk, said Phil Levy, a former trade economist for George W. Bush and a senior fellow at the Chicago Council on Global Affairs.

It would see President Donald Trump invoke the six-month termination clause, which allows a president to later pull out of NAFTA, and let that risk hang over lawmakers as they deliberate over the new agreement.

It’s a strategy Trump has tried before on immigration, so far without success—he cancelled an executive order granting clemency to young migrants and pressed Congress to restore that clemency in a more comprehensive immigration law, which has not happened.

”The administration does not appear to have thought through a viable conclusion for its NAFTA strategy,” said Levy, who also wrote an article for the Forbes website titled ”What Could Go Wrong?” which listed 10 potential risks of this plan.

But one person who has occasionally consulted U.S. trade officials during these negotiations said it’s a logical tactic, to create some pressure on lawmakers who might otherwise opt for inaction and the status quo.

Lori Wallach of the progressive group Public Citizen, which is allied with Trump’s team on some trade issues, says many Republicans will be unhappy with changes to business protections under Chapter 11—and this would force them to vote.

”There’s a broad bipartisan majority in both (congressional) chambers for passing an agreement if it forces a choice,” Wallach said.

”This is not rocket science… This is the choice you always have.”

She discounted another rumour rippling around Washington—that Trump could revise NAFTA by executive order. Other governments have done it in the past, as the agreement actually lets them tinker with several important details, namely automobile rules of origin.

And auto changes are actually the heart of the new pact, Freeland said.

Sources say negotiators are extremely close to an agreement on that issue and are now discussing fine details, like whether to require that a certain percentage of a car be produced by workers making $15 an hour, $16, or a varying range between $16-$19, or whether that dollar threshold should be a median of wages in all three countries.

However, Mexico’s Ildefonso Guajardo dismissed the idea that a new NAFTA will be just about cars.

”There is no sense to modernize the NAFTA, to upgrade the NAFTA, if it’s not based on what you have built in the original one plus new items that have to be (added) according to modernity and the new economy.”

He said negotiators are well advanced in adjustments to telecommunications, energy and digital trade rules.