Freeland to rejoin talks with U.S., Mexico after they agree to overhaul NAFTA [UPDATED]

Trump said, "we could have a separate deal (with Canada) or we could put it into this deal." He also threatened to tax Canadian auto imports to increase the pressure on Trudeau's government 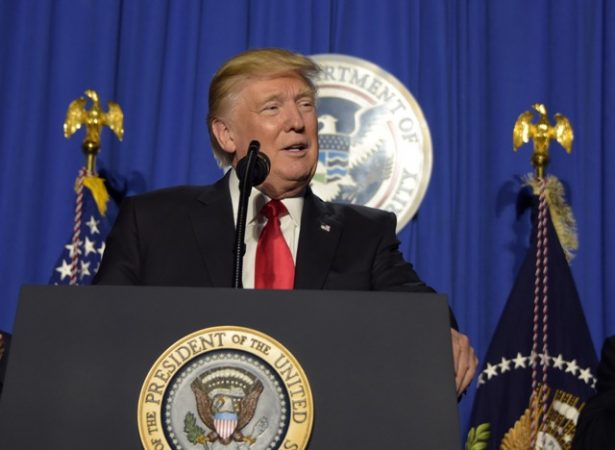 WASHINGTON—Foreign Affairs Minister Chrystia Freeland will head to Washington on Tuesday to re-join face-to-face negotiations with the United States and Mexico on the future of the North American Free Trade Agreement.

Freeland, who will cut short a diplomatic trip to Europe to re-enter the high-level talks, is making the sudden change in plans after U.S. President Donald Trump announced Monday that the U.S. and Mexico had reached a bilateral trade “understanding” that could lead to an overhaul—or perhaps the termination—of the three-country agreement.

In making his announcement, Trump extended an invitation to Ottawa to join what he’s cast as American-Mexican trade negotiations, which have stretched through the summer without Canadian officials at the table.

Trump also threatened Canada that if it can’t reach a new trade deal, then he will slap it with devastating tariffs on automotive imports.

“But one way or the other, we have a deal with Canada. It will either be a tariff on cars, or it will be a negotiated deal; and frankly a tariff on cars is a much easier way to go, but perhaps the other would be much better for Canada.”

Through an interpreter, Pena Nieto reminded Trump four times Monday that he hoped Canada would be part of an eventual trilateral agreement.

“It is our wish, Mr. President, that now Canada will also be able to be incorporated in all this. And I assume that they are going to carry out negotiations on the sensitive bilateral issues between Canada and the United States,” the Mexican president said.

Later Monday, Freeland spokesman Adam Austen said in a statement: “Given the encouraging announcement today of further bilateral progress between the U.S. and Mexico, Minister Freeland will travel to Washington, D.C., tomorrow to continue negotiations.”

Freeland was in Europe for five days of diplomatic visits to Germany, Ukraine and France.

Earlier in the day, Trump suggested he would terminate the 24-year-old trilateral pact with Canada and Mexico—a deal that has been critical for the Canadian economy—and replace it.

“When that happens, I can’t quite tell you, it depends on what the timetable is with Congress, but I’ll be terminating the existing deal and going into this deal,” he said.

Trump also wants to re-baptize the trade agreement with Mexico.

“I like to call this deal the United States-Mexico trade agreement,” he said.

“I think it’s an elegant name. I think NAFTA has a lot of bad connotations for the United States because it was a rip off.”

Canada has been absent from the NAFTA bargaining table since trilateral talks paused last spring.

Observers have raised concerns that Canada’s absence from the talks could put Ottawa in a position where it might be pressured into accepting a less-appetizing deal reached between the U.S. and Mexico.

Trudeau has insisted his government will only sign a deal that’s good for Canada.

Following Trump’s announcement, Trudeau’s office issued a statement saying the prime minister spoke with Pena Nieto on Sunday about NAFTA’s renegotiation and “shared their commitment to reaching a successful conclusion to this agreement for all three parties.”

Trump also called on Canada to negotiate fairly, especially when it comes to dairy products.