Doubts about the trade agreement's future have created considerable economic uncertainty. Canada is keen to rejoin the trilateral agreement 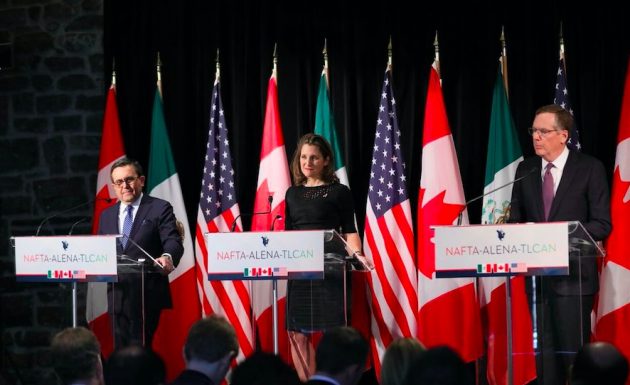 OTTAWA – Canada will rejoin face-to-face negotiations with the United States and Mexico on Tuesday after the two continental partners reached a bilateral deal that raised fresh concerns about the fate of the North American Free Trade Agreement.

U.S. President Donald Trump announced Monday that his administration and Mexico agreed on a trade framework with the potential for big implications for Canada.

He insisted the U.S.-Mexican progress created the foundation for an overhaul – or perhaps the termination – of the three-country agreement.

Trump, a harsh critic of NAFTA, even mused about renaming the deal the “United States-Mexico trade agreement” to wash away the “bad connotations” linked to the 24-year-old pact.

He extended an invitation to Ottawa to join what he cast as American-Mexican negotiations that have stretched through the summer without Canadian officials at the table.

In doing so, he also hit Canada with a threat: if the country doesn’t become part of the new trade deal, he would enact devastating tariffs on automotive imports.

“But one way or the other, we have a deal with Canada. It will either be a tariff on cars, or it will be a negotiated deal; and frankly a tariff on cars is a much easier way to go, but perhaps the other would be much better for Canada.”

Related:
Freeland to rejoin talks with U.S., Mexico after they agree to overhaul NAFTA [UPDATED]

Following Trump’s announcement, Foreign Affairs Minister Chrystia Freeland cancelled the rest of a planned week-long diplomatic trip to Europe so she could travel to Washington to re-enter high-level talks.

The negotiations are important for Canada because NAFTA is a key partnership and doubts about its future have already created considerable economic uncertainty.

Prime Minister Justin Trudeau’s office issued a statement that said he had a “constructive conversation” late Monday with Trump on NAFTA, but it offered few details.

“The leaders welcomed the progress that has been made in discussions with Mexico and look forward to having their teams engage this week with a view to a successful conclusion of negotiations,” it said.

Canada has been away from the NAFTA bargaining table since in-person trilateral talks paused in May.

Observers have raised concerns that Canada’s absence from the talks could put Ottawa in a position where it might be pressured into accepting a less-appetizing deal reached between the U.S. and Mexico.

Trudeau has insisted his government will only sign a deal that’s good for Canada.

The U.S.-Mexican announcement Monday clearly showed their summertime talks not only hashed out bilateral sticking points – such as automobile rules of origin – but also went deep into trilateral issues.

Canada had been expecting the U.S. and Mexico to focus mainly on their bilateral issues, but they agreed on matters including intellectual property, digital trade, labour and financial services.

The new deal would last 16 years with reviews every six years, a senior U.S. administration official said during a briefing. Canadian negotiators have been adamant that they will not agree to an earlier U.S. proposal that NAFTA be renegotiated every five years.

Trump hinted he was ready to start the process of terminating the trilateral trade pact with Canada and Mexico and replace it with what he got Monday from Mexico. He also called on Canada to negotiate fairly, especially when it comes to dairy products.

Through an interpreter, Pena Nieto reminded Trump four times Monday that he hoped Canada would be part of an eventual trilateral agreement, saying it was the Mexican government’s wish that “Canada will also be able to be incorporated in all this.”

Following Trump’s announcement, Trudeau’s office issued a statement saying the prime minister spoke with Pena Nieto on Sunday about NAFTA’s renegotiation and the two leaders “shared their commitment to reaching a successful conclusion to this agreement for all three parties.”

Erin O’Toole, the Tories’ foreign affairs critic, said in a statement that it was critical for Ottawa to be at the negotiating table and the news “confirms that the Trudeau government has failed to advance Canada’s trade interests.”

Adam Taylor, a Ottawa-based trade expert, wrote in an email that because of American laws it’s difficult to envision a scenario where a bilateral U.S.-Mexico deal replaces NAFTA and leaves Canada out in the cold.

“The only way such a scenario is possible is if Canada walks away from the table and the Trump administration convinces Congress that trilateral talks failed, and this is the final outcome agreed to by all parties,” said Taylor, a principal for Export Action Global.

“The appearance of Canada as an irrelevant after-thought in NAFTA is a U.S. frame designed solely to wrestle concessions from the Canadian side.”