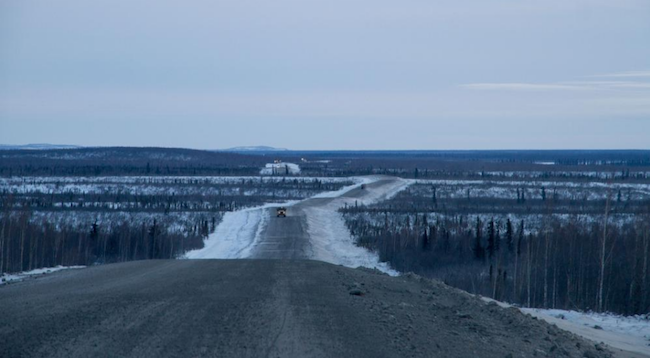 When complete, the 120-kilometre all-weather highway will provide a land connection to the northern town of Tuktoyatuk. PHOTO: Government of Northwest Territories

YELLOWKNIFE—Construction crews in Northern Canada are inching toward completion of a major infrastructure project more than 50 years in the making.

Contractors have wrapped up the third year of winter construction on the Inuvik-Tuktoyaktuk Highway in Northwest Territories, and set the stage to complete the $299 million project next year. The highway will connect the two Arctic communities, and is expected to be a boon for the territory’s economy, which has been forced to rely on ice roads or expensive air shipments in the past.

“The Inuvik to Tuktoyaktuk Highway is a key piece of infrastructure that will help connect people, create jobs, and support economic development in the North,” Amarjeet Sohi, Canada’s minister of Infrastructure and Communities, said. “We are very encouraged by the progress of the project and look forward to the next stage of construction.”

The complex project employs 400 workers at peak construction. Engineers are required to employ novel techniques to ensure the highway is secure while the permafrost it’s build on remains intact. The existing infrastructure of ice roads also means construction can only take place during the colder months.

Crews will resume construction on the northern-most section of the road in the fall, while the highway is scheduled to open to traffic in late 2017.

It remains on-schedule and on-budget.