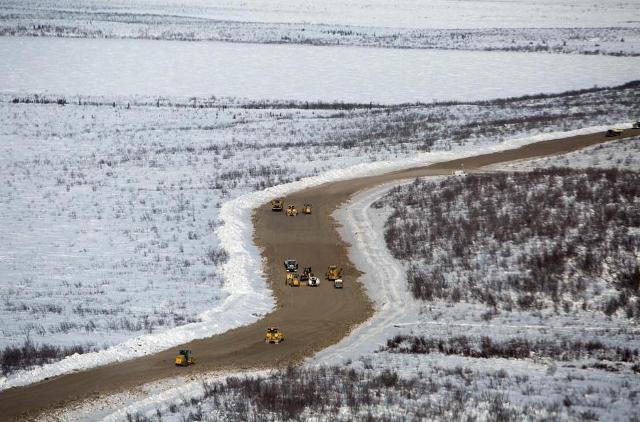 Construction on the highway in Canada’s arctic. The road is scheduled to be completed by autumn next year. PHOTO: Government of Northwest Territories

INUVIK, N.W.T.—The small hamlet of Tuktoyaktuk, N.W.T., located on the Arctic Ocean in Canada’s far north, will not rely on spotty deliveries from ice road truckers and barges much longer.

The Canadian and Northwest Territories governments have announced construction crews have successfully joined the northern and southern segments of a new highway that will eventually connect one of Canada’s most remote communities with the rest of the country year-round. Independent contractors built up the first layer of embankment material at the connection point late last week—a significant milestone in building Canada’s first public highway to the arctic coast.

“The Inuvik Tuktoyaktuk Highway is an essential component of Northern transportation infrastructure,” Amarjeet Sohi, Canada’s minister of Infrastructure and Communities, said. “Not only will it create jobs and economic benefits for Northerners, but it will connect communities, support the transportation of goods, and increase the potential for economic development in the Northwest Territories.”

Crews are currently inching toward concluding the third year of winter construction. Work on the $299 million highway is scheduled to be completed by next year, and open to traffic by autumn. The road is expected to become the northern-most section of the planned Mackenzie Valley Highway, which will connect a number of Mackenzie Valley towns and the Arctic Ocean with the rest of the country year-round.