The $299 million Inuvik Tuktoyaktuk Highway is scheduled to open this fall, will become the first public road to the Arctic Ocean 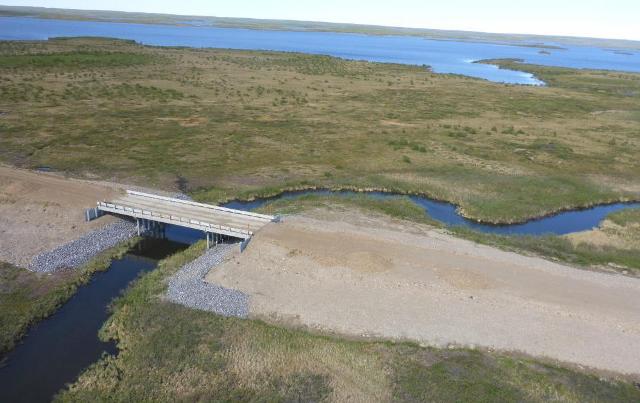 With all bridges complete, the final few months of work will include packing and grading the gravel surface and installing the final touches, such as signage and guard rails. PHOTO: Government of Northwest Territories

INUVIK, N.W.T.——Construction crews have finished the fourth and final season of winter construction on the remote stretch of road that will soon connect Canada from coast to coast… to coast.

The federal and Northwest Territories governments said May 25 that contractors are now just several months away from completing the Inuvik Tuktoyaktuk Highway—a major construction endeavour some 50 years in the making.

Wally Schumann, the N.W.T.’s minister of Infrastructure, said the highway marks an “important milestone” for the region that will connect communities, increase tourism and reduce the cost of living.

“The project has already contributed to significant local training and employment and will continue to provide social, political, and economic opportunities for residents as a new era of uninterrupted access begins for the community of Tuktoyaktuk,” he said in a statement.

A small hamlet on the Arctic Ocean, Tuktoyaktuk has been connected to Inuvik by a seasonal ice road until now. This past winter offered adventurers one last chance to take on the frozen tundra and remote rivers on the 187-kilometre route between the two Arctic communities.

As brave drivers got their final fix, construction crews completed the last two bridges on the new all-season road and crushed and stockpiled gravel needed to complete the project. The highway will be packed and graded with gravel this summer, while the finishing touches—guard rails and signage—will be installed this fall.

The $299 million project is scheduled to open November 15 and will become the first public road to the Arctic Ocean.

The only other link, beyond Deadhorse in northern Alaska, is off-limits to regular motorists.