First all-weather road to Arctic Ocean in Canada on-schedule; work on challenging $299 million infrastructure project will be completed next year 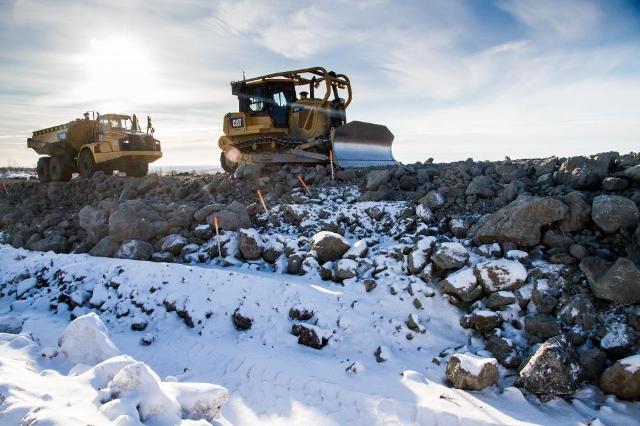 Contractors joined the northern and southern segments of road this spring, setting the stage to complete the project next year. PHOTO: Government of Northwest Territories

Construction crews have just begun the fourth and final year of winter construction on what will become the first all-weather road to the Arctic Ocean in Canada. The highway will connect Inuvik with distant Tuktoyaktuk, promising a more reliable stream of supplies and eliminating the hamlet’s reliance on ice roads, aircraft and barges.

“In addition to moving goods and people, it will serve as a key link in connecting Northern communities,” Michael McLeod, MP of N.W.T., said in a statement. “Such infrastructure investments create jobs and encourage economic growth.”

This spring, contractors joined the northern and southern segments of the gravel highway, laying the initial layer of embankment material before pausing for the summer. Because of the lack of current infrastructure, much of the work on the $299 million project has taken place during the winter when ice roads can be used to deliver supplies. Engineers are also forced to employ a number of novel techniques to ensure the road surface remains stable atop the permafrost.

Over the next few months, crews will complete the final 3.5 kilometres of highway, building eight culverts and a pair of bridges. Workers will then put the final touches on the road over the summer, installing signs, guardrails and traffic lights, as well as completing the final surfacing work.

The highway is expected to open next fall.