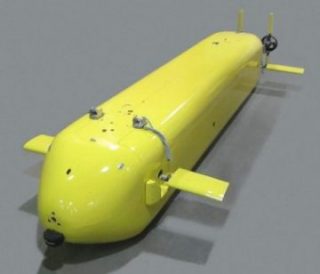 General Motors and the U.S. Navy are collaborating on a hydrogen fuel cell-powered unmanned undersea vehicle that could remain at sea for as long as two months. GM plans to reapply lessons learned on the project to its vehicles. PHOTO: GM

The car maker has announced that it and the U.S. Naval Research Laboratory are collaborating on an underwater drone powered by GM’s hydrogen fuel cell technology originally developed for the automotive industry.

While typical UUVs are powered by batteries, to propel larger displacement vehicles on longer voyages—as long as 60 days—the Navy is eying fuel cells as a promising alternative.

“Our in-water experiments with an integrated prototype show that fuel cells can be game changers for autonomous underwater systems,” said Frank Herr, head of the Ocean Battlespace Sensing department at the Office of Naval Research (ONR). “Reliability, high energy, and cost effectiveness—all brought to us via GM’s partnering—are particularly important as Navy looks to use UUVs as force multipliers.”

Though batteries—specifically lithium-ion batteries—have emerged as the more popular clean technology in the automotive space so far, hydrogen proponents continue to tout the benefits of fuel cell technology, particularly for larger vehicles and longer range solutions.

GM says the project will provide the company with a wider range of knowledge about fuel cell technology it can then reapply to its vehicles.