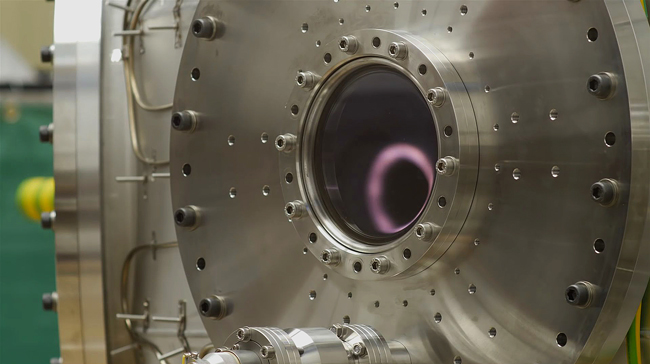 The new ST40 is the company’s third new reactor in the past five years. It achieved its first plasma April 28. PHOTO: Tokamak Energy/YouTube

As an international team slowly pieces together ITER, a multibillion-dollar fusion project in southern France, a start-up company in the U.K. has switched on a considerably smaller device designed to accomplish the same thing—fuse particles together at millions of degrees Celsius.

“The ST40 is a machine that will show fusion temperatures—100 million degrees—are possible in compact, cost-effective reactors,” David Kingham, the company’s CEO, said in a statement.

“This will allow fusion power to be achieved in years, not decades,” he added. 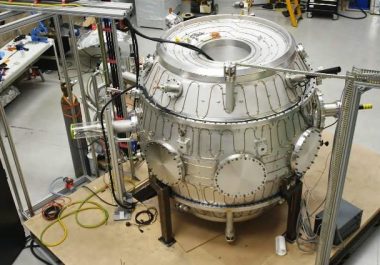 Tokamak’s compact reactor is about 100-times smaller than ITER, which is being build in southern France. PHOTO: Tokamak Energy/YouTube

Using a compact design, Tokamak’s new reactor fits in a typical room and stands in stark contrast to larger-scale projects such at ITER, which is being built on a 42-hectare site and will have a reactor the size of an aircraft hangar.

Despite the considerable differences between the two reactors, both ITER and ST40 are tokamak-type fusion devices.

But the U.K. start-up is betting its reactor’s significantly smaller footprint will allow for quicker development and a more cost-effective device. Tokamak has not released the cost of ST40, but it’s safe to assume the reactor cost a small fraction of the estimated 16 billion euro bill ITER is expected to run up.

The name tokamak derives from a Russian acronym for toroidal chamber with magnetic coils—and the machine itself uses a doughnut-shaped vacuum chamber to create enough heat and pressure to generate plasma—an ionized state of matter.

To begin fusing particles together, a reactor needs to heat plasma to more than 100 million C.

And it’s here, by pursuing a compact reactor, the U.K. start-up company is taking a somewhat contrarian view. Tokamak admits most researchers say fusion reactors need to be significantly larger—built on a scale similar to ITER—to produce energy. Still, armed with experimental data to support its work and private funding, the company is pushing forward; ST-40 is its third new reactor in the past five years.

It aims to achieve the 100 million C threshold in the new reactor next year and reach the energy break-even point in 2020. Ultimately, the company hopes to be able to use its compact tokamak to produce electricity by 2025 and have a market-ready product by 2030.

“We are already half-way to the goal of fusion energy; with hard work we will deliver fusion power at commercial scale by 2030,” Kingham said.

Despite the optimism, the clean power project is far from a simple endeavour. Researchers have been working on fusion technology for decades and while the race does seeming to be slowly gaining ground, the company still faces financial, engineering and perhaps even theoretical challenges.

Meanwhile, other nuclear researchers are working toward the next fusion breakthrough as well.

Along with the tokamak research at ITER and several other locations around the world, physicists in Germany switched on another type of reactor known as a stellarator last year. In Canada, General Fusion is working to commercialize yet another type of device that uses a process known as magnetized target fusion.