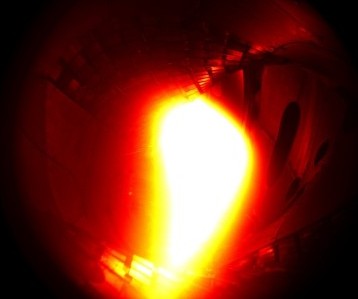 GREIFSWALD, Germany—The high-profile debunking of the cold fusion concept in the late ’80s led to a long winter for many nuclear fusion technologies, but scientists at Germany’s Max Planck Institute for Plasma Physics have finally switched on a massive research project sure to reignite the long-running debate about the plausibility of earth-bound fusion.

The product of more than nine years of construction, one million installation hours, a countless amount of research and more than 370 million euro, the Wendelstein 7-X nuclear fusion device is the largest stellarator-type reactor ever built and designed to show whether or not the fusion technology could be used to generate electricity.

Last week, German researchers switched the device on, using it to create helium plasma in the first phase of experimentation.

“We’re very satisfied”, Hans-Stephan Bosch, whose division is responsible for the device’s operation, said following the experiment. “Everything went according to plan.” 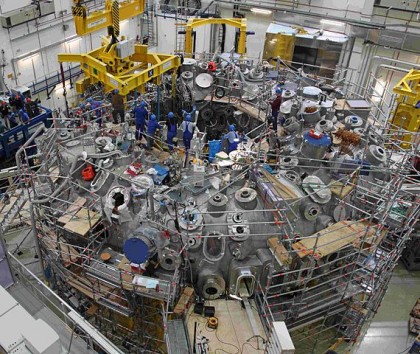 Construction of the Wendelstein 7-X. The project took more than nine years and one million installation hours to complete. PHOTO IPP

Plasma, which is a state of matter like a gas, liquid or solid, can be created through super-heating a gas. In the case of the reactor’s helium plasma, researchers heated the element to a temperature of 1,000,000 C (one million degrees Celsius) using a magnetic field, a computer-operated control system and a 1.3 megawatt microwave pulse. The product was plasma with a duration of one-tenth of second. One of the major impediments to fusion is the extreme temperatures involved. Fusion only ignites at approximately 100 million degrees, and as a result, the material must not come into contact with the walls of the device creating the reaction.

Researchers were satisfied by the initial results, and will now begin testing longer longer discharges to determine the “best method of producing and heating helium plasmas” using the microwaves.

“We’re starting with a plasma produced from the noble gas helium. We’re not changing over to the actual investigation object, a hydrogen plasma, until next year,” project leader and professor, Thomas Klinger, said. “This is because it’s easier to achieve the plasma state with helium. In addition, we can clean the surface of the plasma vessel with helium plasmas.”

The more applicable hydrogen plasma testing will get underway in January. 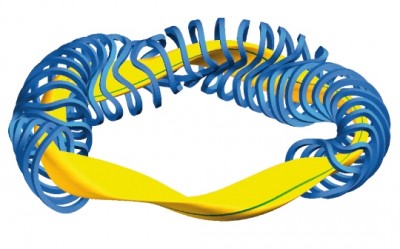 Scheme of coil system (blue) and plasma (yellow) of the Wendelstein 7. PHOTO: IPP

Ultimately, the massive research project, and other fusion research, aims to develop a power source that is friendly to the environment, sustainable, and capable of producing a prodigious amount of energy by fusing atomic nuclei together in an artificial version of a star.

Another advanced project designed to test the alternative tokamak-type fusion device is currently under development in France and scheduled to be completed in 2020.