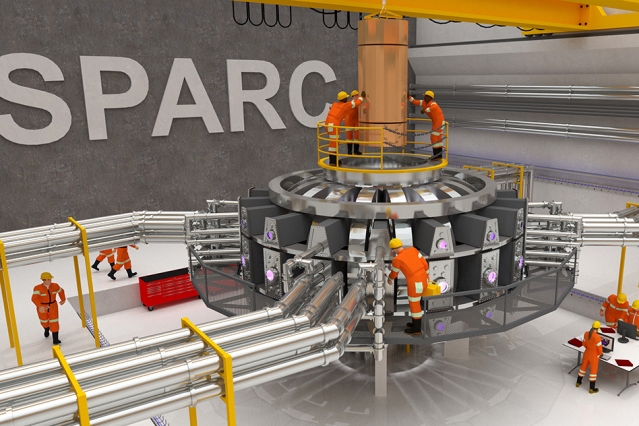 A rendering of the nuclear fusion reactor. The company aims to build the device capable of producing 100 megawatts of energy within 15 years. PHOTO: Ken Filar/MIT

CAMBRIDGE, Mass.—A new American start-up shooting for a very small, high-tech star has secured the backing of one of the world’s largest energy companies.

Founded last year by six scientists working out of the Massachusetts Institute of Technology, Commonwealth Fusion Systems announced last week it has locked in US$50 million in support from Italy-based supermajor Eni.

Like other nuclear fusion ventures, the company plans to create a reactor capable of fusing hydrogen nuclei together at millions of degrees Celsius, simulating the fusion process that fuels stars and producing prodigious amounts of clean energy.

Fusion has long been seen as one of the Holy Grails of clean power and could lead to a wholesale reimagining of global energy markets.

“This is an important historical moment: Advances in superconducting magnets have put fusion energy potentially within reach, offering the prospect of a safe, carbon-free energy future,” MIT president Rafael Reif, said in a statement.

The CFS project will use a tokamak-type nuclear reactor—as opposed to the stellarator-type design currently being tested in Germany. In the most basic sense, the tokamak is a donut-shaped chamber that uses powerful magnetic fields to hold superheated plasma in place. Left to its own devices the “fusion fuel” would easily scorch through any solid receptacle designed to contain it.

The International Thermonuclear Experimental Reactor, or ITER, uses the same fundamental design, though on a far larger scale. That multinational project reached its half-way construction milestone last December and is expected to cost some $23 billion.

While ITER is a significant milestone itself, the smaller footprint of the Cambridge, Mass.-based company’s system would be a major coup for fusion technology. The company aims to build a reactor capable of producing 100 megawatts of fusion power and has given itself 15 years to achieve the milestone. Despite the seemingly lengthy timeline, smaller-scale fusion is a challenging and scientifically controversial proposition.

The key to the process, the CFS researchers say, is a new generation of large-bore superconducting electromagnets that will allow the company to contain hot plasma using a smaller system. Collaborating with MIT, CFS plans to spend approximately $30 million developing the magnets over the next three years. The magnets use a material that only recently became commercially available and are expected to produce a magnetic field four times as strong as any currently in use on fusion projects.

Using the powerful electromagnets, the start-up and MIT will then begin designing and building the tokamak reactor, dubbed SPARC.

The ultimate goal of the project is to produce more fusion power than the reactor requires to run. At this stage CFS expects the system to produce twice as much energy as it needs to heat plasma. If successful, the reactor could then be improved and scaled to fit different applications, ushering in a new nuclear age.

The design builds on decades of work at both MIT and fusion researchers elsewhere, said Dennis Whyte, one of the start-up’s founders and the deputy director of MIT’s Plasma Science and Fusion Center.

“If SPARC does achieve its expected performance, my sense is that’s sort of a Kitty Hawk moment for fusion, by robustly demonstrating net power, in a device that scales to a real power plant,” he said.

While the research team says the project is expected to complement ITER, it could also offer lower costs due to its smaller footprint and more advanced magnets.

Newly-formed Commonwealth Fusion is not the only start-up in hot pursuit of small-scale fusion, however. Canada’s General Fusion and the U.K.’s Tokamak Energy Ltd., which began testing a tokamak reactor of its own last year, are among the others vying for a breakthrough.