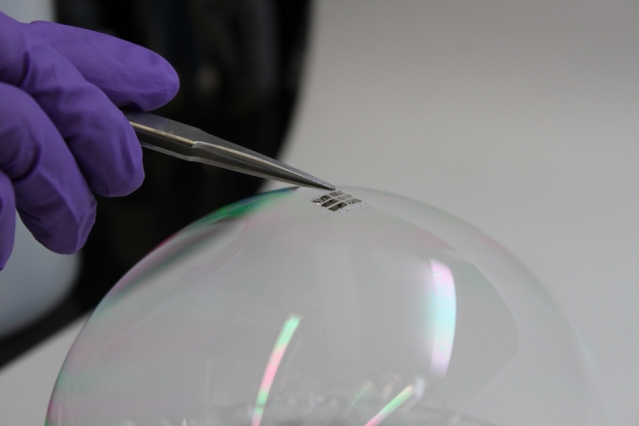 Researchers demonstrate the solar cells’ extreme lightweight by affixing a demonstrator to a soap bubble without bursting it. PHOTO: Joel Jean and Anna Osherov/MIT

CAMBRIDGE, Mass.—Researchers at the Massachusetts Institute of Technology have developed the thinnest and lightest solar cells ever produced.

Lightweight enough to cling to the transparent edge of a soap bubble without bursting it, the cells could help power the next generation of mobile electronics, spacecraft, or even harness energy while affixed to high-altitude helium balloons.

According to Vladimir Bulović, MIT’s associate dean for innovation and a professor of emerging technology, the new product relies on producing the entire solar cell—the photovoltaic material, a supportive substrate and a protective overcoating—all in one process.

Bulović, along with research scientist, Annie Wang, and doctoral student, Joel Jean, recently outlined the process with “tremendous implications” in a paper published in the journal Organic Electronics.

“The innovative step is the realization that you can grow the substrate at the same time as you grow the device,” Bulović said in a statement.

In the proof-of-concept demonstrator, the team used a flexible polymer called parylene, which is commonly used in implanted biomedical devices and printable electronics, as the substrate, as well as the overcoating. For the primary light-absorbing layer the team used an organic material called DBP. The entire “growth” process takes place in a vacuum chamber at room temperature, and excludes the solvents used in traditional solar cell manufacturing.

The finished cell is about one-fiftieth the thickness of a human hair and approximately one-thousandth the width of typical solar cells with glass substrates. While it uses glass as a sturdy carrier material, the researchers said the combination of materials used in the demonstrator is just an example, and that different materials such as quantum dots or perovskites could be used to produce cells for specific applications.

At just two micrometers thick, the researchers admit the solar cell is not especially efficient, but because of its ultra lightweight, the cell’s power-to-weight ratio is among the highest ever achieved. As a result, the team predicts the cells could be employed on a range of new technologies that require lighter photovoltaics than ground-based solar installations. Wearables, spacecraft and high-altitude research balloons are among the prospects.

“It could be so light that you don’t even know it’s there, on your shirt or on your notebook,” Bulović said. “These cells could simply be an add-on to existing structures.”

Though the proof of concept is promising, the team of researchers has warned developing the laboratory work into a commercial-scale product will take time.

“We have a proof-of-concept that works,” Bulović said. The next question is, “How many miracles does it take to make it scalable? We think it’s a lot of hard work ahead, but likely no miracles needed.”