In a discovery that could shake up the nascent solar window market, NREL scientists have built a thermochromic device that transforms from transparent to opaque, helping it convert sunlight to electricity at 11.3 per cent efficiency 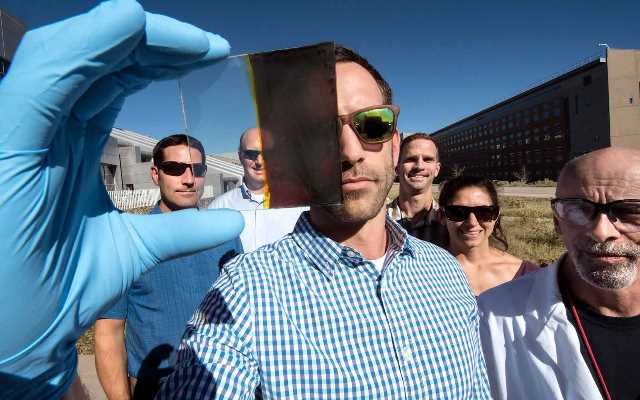 Lance Wheeler holding one of the solar cells, which demonstrates how the photovoltaic technology is split between transparent and opaque. PHOTO: NREL

GOLDEN, Colo.—Scientists at an American research lab have developed a new type of thermochromic window that can convert sunlight into electricity while transforming from transparent to tinted.

The “switchable” solar cell uses a combination of advanced materials, such as perovskites and single-walled carbon nanotubes and changes colour as methylamine molecules are absorbed into or driven out of the device when the exposed to heat.

When generating electricity, the window is nearly opaque, allowing just three per cent of light through. In its transparent or bleached state, it lets 68 per cent of visible light to pass through it, meaning it’s able to function as both window and solar cell. It was developed at the National Renewable Energy Laboratory in Golden, Colo., a lab owned by the U.S. Department of Energy and operated by by The Alliance for Sustainable Energy.

The device could shake up the nascent solar window market, which currently focuses on static, or non-tinting windows, that harness only a fraction of the available sunlight.

The deceive remains in the proof of concept stage, but could prove an important development for solar window technology.

Still, the early-stage device does not remain stable for long. The NREL scientists say the demonstration model degraded over the course of 20 cycles. Ongoing research aims to improve its stability, a necessity if the technology is to find a home in the commercial market.

The researchers say the product could be used to vehicles and buildings to power everything from small electronics to electric motors.