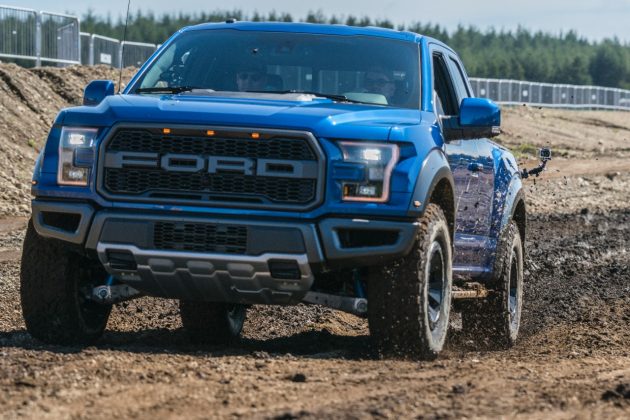 Because the Raptor is based on the F-150 Baja 1000 desert race truck, all Raptors also come standard with four-wheel drive. PHOTO: Ford Motor Co.

DETROIT—Ford’s brawny 2017 F-150 Raptor pickup truck is raking in the accolades, with its more powerful engine and new 10-speed transmission. And for the first time, it’s being offered in the automaker’s SuperCrew body style, which makes it roomier than ever.

The Raptor’s fuel economy is better, too, as it now sports the lighter aluminum body panels found on regular Ford F-150 trucks and its 6.2-litre V8 engine has been replaced by a 3.5-litre twin-turbocharged EcoBoost V-6.

The federal government rates the 2017 Raptor at 15 mpg in city driving and 18 mpg on highways, which is 23 per cent better than the previous version.

The new, smaller engine generates more power than the bigger, heavier V8—450 horsepower and 510 foot-pounds of torque. The powerplant also gives the 2017 Raptor a towing capacity of up to 8,000 pounds.

The new Raptor weighs about 500 pounds less than its predecessor and the combination of lighter weight truck and a more powerful engine makes the 2017 Raptor fast, going from standstill to 60 mph in just over 5 seconds.

The 2017 Ford F-150 also earned a full five stars for occupant protection in U.S. government frontal and side crash testing.

All 2017 Raptors come with the new engine and new, 10-speed automatic transmission.

Because the Raptor is based on the F-150 Baja 1000 desert race truck, all Raptors also come standard with four-wheel drive.

Buyers can load up the Raptor with luxury appointments such as a twin-panel moonroof, leather seats and a voice-activated navigation system. They also can choose colorful graphics for the exterior and add functional equipment, such as pickup bed dividers and a bedliner.

The Raptor looks impressive at first glance. There’s no small, blue Ford oval on the grille. Instead, the word “Ford” is spelled out in large, dark, capital letters across the front.

The front and rear bumpers are smaller than what might be expected, but for a reason: Short bumpers provide good approach and departure angles for the vehicle when it’s off-road.

The truck rides high on 35-inch-tall all-terrain BF Goodrich tires, so the hood is above chest height and every passenger has great views above traffic and the neighbour’s fences. But the test-driven Raptor SuperCrew showed off the adaptability of the suspension with the newly engineered Fox Racing shock absorbers.

Driving on pavement, there was no mistaking the truck for a sports car, but it was intriguingly composed and under control. The long, 145-inch wheelbase helped smooth out the bounciness over highway expansion cracks.

The Raptor excelled off-road. Thanks to its robust suspension control arms, specially tuned springs and impressive wheel travel, the test-driven truck was practically nonchalant on dirt paths to a fishing cabin and confidently adept in more challenging terrain.

The Raptor’s steering is nicely weighted and provides good feedback to the driver. There is tire noise, particularly on rough pavement, and wind noise intrudes, too.

The twin-scroll turbo gave punch to the power and sounded strong, but fuel economy hovered just below 13 mpg.

Both front- and rear-seat legroom and legroom are beyond generous, and the Raptor incorporates the thoughtful, easy-to-live-with amenities of regular F-150s, such as plentiful storage cubbies.