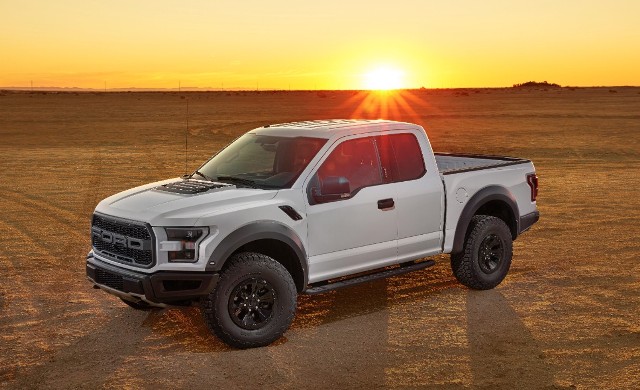 More powerful and lighter, the new Raptor has an EPA-estimated combined fuel economy of 16 mpg—23 per cent better than its predecessor. PHOTO: Ford

DEARBORN, Mich.—It’s official. The new engine in Ford’s 2017 F-150 Raptor will ratchet up the already heavy-hitting vehicle to 450 horsepower.

Unveiling the updated truck’s specs late last week, Ford Motor Co. said it has made the vehicle 500 pounds lighter than the 2014 model, outfitted it with the second-generation 3.5-liter high-output EcoBoost engine and wired in an all-new 10-speed automatic transmission that will come standard in the “no-compromise” off-roader.

Doing away with the 6.2-litre V8 in previous models, which delivered 411 horsepower alongside 434 lb.-ft. of torque, Ford has touted the new motor as a more than fitting replacement. The high-output EcoBoost is rated at 450 HP and 510 lb.-ft. of torque.

“Raptor was designed to be a no-compromise, off-road performance machine,” Matt Tranter, Ford Performance engineering supervisor, said. “That is why we made the switch from the cast-iron V8 to the aluminum block, high-output GTDI V6 EcoBoost engine that our team tuned to add 39 horsepower and 76 lb.-ft. of torque for today’s Raptor.”

“Looking at the torque curve of the Raptor’s EcoBoost engine, you see the twin turbos spool quicker for faster time to torque—it hammers quick and keeps delivering torque for a more brawny feel than its V8 predecessor,” Al Cockerill, powertrain development engineer for the truck, said.

Designed to go lighter on fuel, the Environmental Protection Agency estimates the new Raptor will perform at at approximately 16 mpg in combined fuel economy, or 23 per cent better than its predecessor. Along with the engine, the lighter-weight military-grade aluminum alloy body is another contributing factor to the improve mileage.

To complement the new engine, Ford has outfitted the new Raptor with a 10-speed automatic transmission. The company said the transmission’s closer ratio between gears and its hydraulic control system will better optimize the power and torque curves of the 3.5-liter engine.

The truck will be built at the company’s Dearborn Truck Plant in Michigan.

Ford says it will hit dealerships with a suggested retail price of under US$50,000.