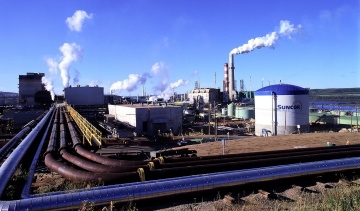 Suncor has committed to reducing its emissions 30 per cent by 2030. PHOTO: Suncor Energy

CALGARY—Canadian oil giant Suncor Energy Inc. is joining the global effort to cut down on emissions.

Releasing its 2016 Report on Sustainability late last week, the company announced it will work to trim the overall emissions from its oil production 30 per cent by 2030.

“I believe in climate change and that the production and consumption of fossil fuels is contributing to this pressing global challenge,” Steve Williams, president and CEO, said. “I also believe we all have the opportunity—and responsibility—to collaborate on effective solutions.”

Along with cutting its emissions, the producer said it will continue working to increase energy efficiency across all its facilities. Where it has the opportunity to do so, it will also switch to lower-carbon fuels such as natural gas.

After setting a range of goals in 2009, the company has already made some improvements—making good on three of its four commitments. Suncor reduced its fresh water consumption 27 per cent over the past six years, increased reclamation of disturbed land by 176 per cent and improved air emissions 36 per cent. It also came close to achieving its goal of reducing energy intensity 10 per cent—improving its energy efficiency 9 points across its wide range of operations.

Along with the new 30 per cent emissions reduction goal, the company plans to work toward a cleaner grid through investing in cogeneration and renewable energy at its plants.

Researching a range of innovative technologies, including a waterless extraction process, Suncor has also committed to piloting more projects that could cut emissions by improving on conventional bitumen extraction techniques.