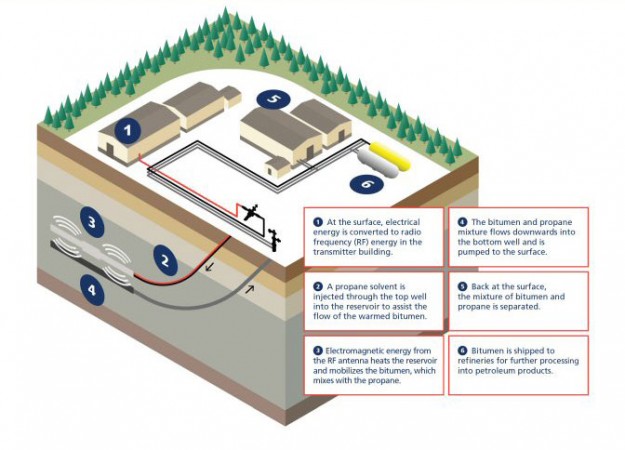 CALGARY—Suncor Energy, along with several of its partners, have announced the first radio frequency pilot program for oil recovery from within an in situ reservoir. The technology, known as Enhanced Solvent Extraction Incorporating Electromagnetic Heating, or “easy,” uses radio frequency to heat the reservoir before adding a solvent, which facilitates the movement of the bitumen to the surface.

The technology has the potential to transform the way energy companies extract oil from in situ reservoirs. Normally achieved through steam-assisted gravity drainage, which is water and energy-intensive, or cyclic steam stimulation, which presents the same challenges, the new technology could significantly alter production techniques in Alberta’s oilsands, as well as in other regions.

“The ESEIEH technology, if successful and commercially viable, has the potential to improve economic and environmental performance in the oil sands by eliminating the need for water at in situ operations, reducing greenhouse gas emissions and decreasing our environmental footprint,” Gary Bunio, general manager of oilsands strategic technology for Suncor, said.

The technology will be tested at Suncor’s Dover test site, north of Fort McMurray, Alta, with Suncor, Devon, Nexen Energy, as well as the Harris Corporation partnered on the project. Part of the funding has also been provided by the Climate Change and Emissions Management Corporation.

“The partners are working together on a new technology that has the potential for significant economic and environmental advantages over traditional extraction processes,” Brian Blakey, vice-president and general manager of energy solutions at Harris, said. “The new technology benefits from Harris’ leadership in radio frequency science and engineering.”

ESEIEH uses Harris’ patent-pending antenna technology to heat the oil sands electrically with radio waves. The group has been collaborating on this technology since 2011 with initial physical testing of the technology in 2012 at Suncor’s Steepbank mine facility. Testing will now begin at an in situ reservoir and last approximately 24 months.