Part of a global realignment, oil and gas company said cuts are a result of Canada looking less attractive than some other markets 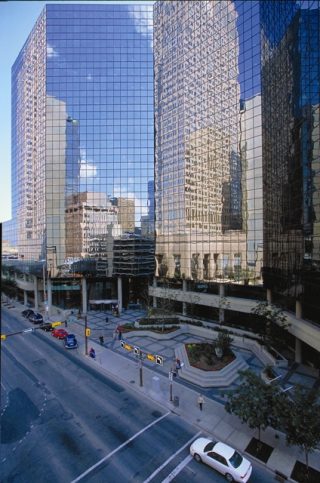 The majority of the cut cuts will be at the company’s head office in Calgary. PHOTO: ConocoPhillips

CALGARY—ConocoPhillips Canada says it plans to lay off 250 to 300 employees this September, with the vast majority of cuts coming from its Calgary head office.

Company spokesman Rob Evans said late last week that the cuts are part of a global staff realignment to match future activity levels, with Canada looking less attractive than some of its other operations.

“Low commodity prices, combined with our inability to get product to new markets, has resulted in lower prices in Canada relative to other parts of the world,” Evans said in an email.

“Coupled with increased local cost pressures such as corporate taxes, regulatory compliance costs and property taxes, staying competitive in a global portfolio is a challenge for some parts of our Canadian business.”

In a statement, Alberta Energy Minister Marg McCuaig-Boyd said the government is working to improve market access for Alberta oil.

“While we have no control over the global price of oil, we are taking the steps necessary to improve Alberta’s environmental reputation, get pipelines approved and diversify our energy economy,” she said.

“There’s no question that the previous federal and provincial governments did our energy industry a great disservice by denying climate change and failing to get pipelines built.”

McCuaig-Boyd added that job losses brought on by the low oil price are placing real hardship on too many families, but that Albertans support the government’s policies.

“Albertans also support our move toward corporate-tax fairness and ensuring regulations are in place that protect our environment and economy,” she said.

Evans said ConocoPhillips staff were told about the coming job cuts Thursday, but that details of how it will affect specific parts of the business are still being worked out.

The cuts at ConocoPhillips’ Canadian operations form part of the roughly 1,000 job cuts the company plans across its North American operations.

Last week, AltaGas confirmed it had laid off 70 staff after shelving or selling some natural gas projects.

The Canadian Association of Petroleum Producers estimates at least 44,000 direct jobs have been lost in the oil and gas industry since the downturn started.