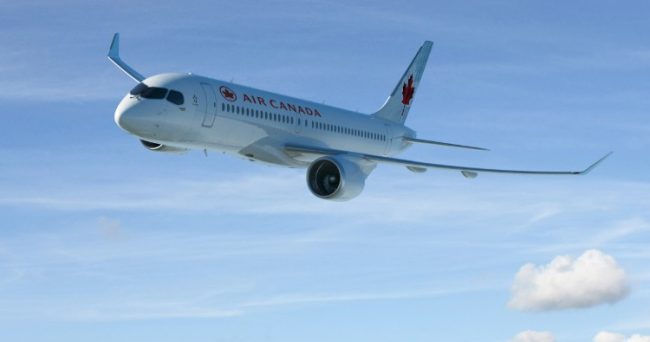 Following up a letter of intent, the Canadian airline has placed a firm order for 45 CS300s, the larger of the two CSeries aircraft. PHOTO: Bombardier

MONTREAL—Bombardier Inc. has locked in a mutlibillion-dollar order for its CSeries aircraft from Air Canada.

Following up on a letter of intent announced earlier this year, Bombardier’s Commercial Aircraft division and Air Canada have finalized an agreement for 45 CS300 aircraft. Worth US$3.8 billion at list prices, the order’s value could climb to $6.3 billion if Air Canada exercises contract options for an additional 30 jets.

“I’m pleased to officially welcome Air Canada to our CS300 family of operators as one of our largest customers and early adopters,” Alain Bellemare, the Montreal-based plane and train maker’s president and CEO, said. “As an innovative operator, admired for successfully reinventing itself and, like Bombardier based in Québec, Air Canada and the C Series aircraft are a perfect match.”

“This order is a major statement of support for Canada’s aerospace industry and will help support thousands of C Series related jobs,” Bellemare added. “It also serves as an important catalyst for renewed interest and subsequent orders.”

The larger of the two CSeries aircraft, the CS300 is designed to carry a maximum of 160 passengers. Bombardier said deliveries for the order will begin in 2019 and run through 2022.

Meanwhile, Bombardier is poised to deliver the first plane from its long-delayed family of jets in Mirabel, Quebec on June 28.