Bombardier to cut 7,000 jobs over next two years 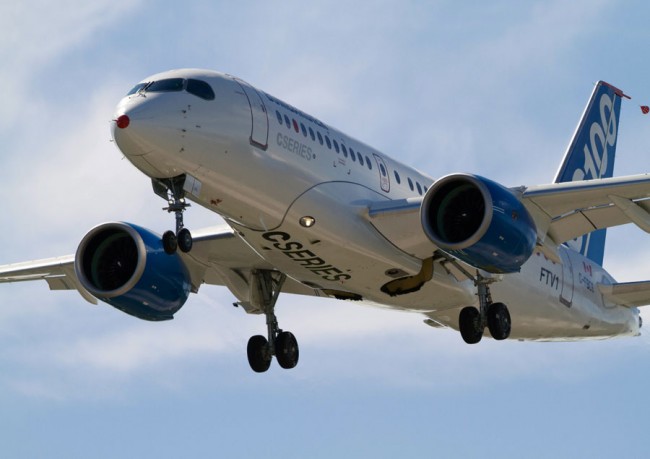 Bombardier said Air Canada will buy up to 75 of its larger CS300 aircraft. The first CS100 is scheduled to go into service shortly with European carrier SWISS. PHOTO Bombardier

MONTREAL—Bombardier announced Wednesday it will eliminate 7,000 positions over two years—more than a third of which will come from Canada—in the latest effort by the country’s largest aerospace company to turn itself around as it awaits word of federal aid.

The Montreal-based firm said the layoffs will include 2,830 jobs in Canada, including 2,400 in Quebec. Nearly half of all the cuts would be at Bombardier Transportation, its rail division, which will lose 3,200 jobs.

Bombardier employs about 74,000 people around the world, according to its website.

The cuts will be partly offset by hiring in certain areas, particularly as Bombardier plans to ramp up production of its new CSeries jets, the company said. Layoff notices are expected to be issued in the coming weeks and completed by next year.

No job losses are anticipated at the company’s commercial aircraft business segment, which supplies airlines with passenger planes including the CSeries, which Bombardier has had trouble selling.

Amid the bad news there was a sign that Bombardier could be reviving its fortunes: a letter of intent that could see Air Canada buy 45 CSeries 300 planes, with an option to buy up to 30 more.

“We are turning Bombardier around,” CEO Alain Bellemare said during a conference call. “We have a plan to make this great company stronger and more competitive.”

The CSeries is Bombardier’s new generation of aircraft for commercial airlines, in development for more than a decade as an alternative to smaller models of passenger jets built by rivals Boeing and Airbus. The aircraft is about two years behind schedule and at least US$2 billion over budget.

Bombardier said it hopes Ottawa will come through on its request for financial assistance for the CSeries, just as the Quebec government has done in providing US$1 billion in support.

The federal government issued a statement Wednesday saying it was still reviewing that request.

“Any action the government takes with respect to Bombardier will be first and foremost in the interest of Canadians,” federal Innovation Minister Navdeep Bains said. “We have been clear that such an important decision will only be made after due diligence, careful consideration and a strong business case.”

Transport Minister Marc Garneau said he was encouraged to hear of the agreement between Bombardier and Air Canada but concerned about those losing their jobs.

The announcement of job cuts and the letter of intent with Air Canada came as Bombardier released its financial report for 2015 and an outlook for 2016. The airline said it will buy at least 45 CS300 aircraft, with options for 30 more.

Among other things, Bombardier reported its revenue in the fourth quarter ended Dec. 31 was $5 billion, down from just under $6 billion a year earlier.

Bombardier is also planning to reduce the number of shares it has outstanding. The company plans a special shareholder meeting to get approval for a reverse stock split that will aim to exchange outstanding shares for a smaller number of consolidated shares, with a price in the range of C$10 to $20 each.


Related Stories
Bombardier shares close below $1 for first time in 25 years
Bombardier cuts 2016 CSeries production forecast by more than half
Bombardier to cut 1,600 jobs in move to reduce costs and consolidate work
Bombardier cutting 7,500 jobs by end of 2018