The mammoth diamond was found at the company's Karowe mine 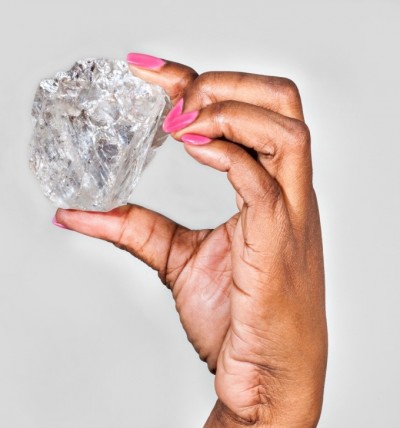 The 1,111 carat diamond recovered at Lucara’s Botswana mine. PHOTO: Lucara

Officially weighing in at 1,111 carats, the rock is the second-largest ever found. The mammoth gem is Type IIa, meaning it contains close to no impurities and was recovered from the south lobe of the company’s Karowe Mine in Botswana.

“This historic diamond recovery puts Lucara and the Karowe mine amongst a select number of truly exceptional diamond producers,” the company’ president and CEO, William Lamb, said. “The significance of the recovery of a gem quality stone larger than 1,000 carats, the largest for more than a century and the continued recovery of high quality stones from the south lobe, cannot be overstated.”

In the more than 100 years since the discovery of the Cullinan Diamond—the world’s largest—from a mine outside Pretoria, South Africa, nothing gem miners have uncovered has come anywhere close to rivaling it. The more than 3,100 carat stone was partitioned into numerous diamonds and the largest pieces are now famous for being part of the British Crown Jewels.

Though even Lucara’s newly-discovered stone would pale in comparison to the legendary Cullinan, it measures a whopping 65 by 56 by 40 millimetres.

The company noted the gem is also the largest ever recovered using a modern processing facility. The “magnificent” stone was recovered using the company’s newly-installed Large Diamond Recovery XRT machines.