Lucara unearthed the massive stone in Botswana last year; it's the largest gem-quality diamond found in the more than a century 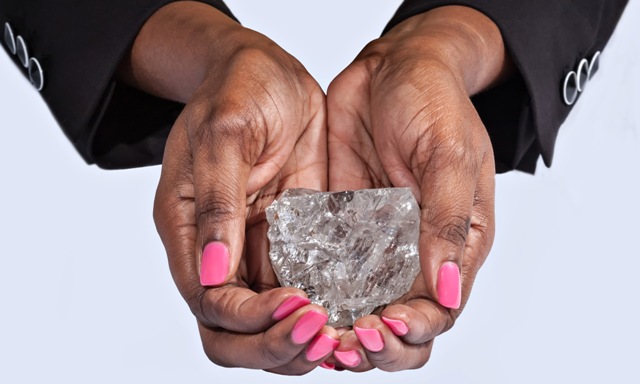 The 1,111 carat diamond recovered at Lucara’s Botswana mine last year is the second-largest diamond ever unearthed. PHOTO: Lucara

CALGARY—A diamond the size of a tennis ball discovered by a Vancouver mining company failed to sell June 29—and at least one expert is blaming it on Britain’s referendum to leave the European Union.

The 1,109-carat Lesedi La Rona diamond drew a high bid of US$61 million at the Sotheby’s auction in London, falling short of the minimum Lucara Diamond Corp. was willing to accept.

Lucara CEO William Lamb declined to reveal exactly how much his company was seeking from the auction, but said it was slightly higher than the US$70 million Sotheby’s had estimated the stone would fetch.

Lamb said while he was disappointed, the company now has a better understanding of how much value investors will place on the gem.

“We needed to assess whether there was a market where people who spend a hundred million dollars on a Picasso will actually see the value in a rough diamond,” said Lamb.

He said Lucara and Sotheby’s tried to reach the widest market possible, looking beyond diamond traders to wealthy individuals as it hosted a global tour in cities like Dubai, Hong Kong and New York to promote the jewel.

But the financial upheaval from the United Kingdom’s vote to leave the EU last week may have caused many of those potential buyers to bow out, says diamond analyst Paul Zimnisky.

“I think it was definitely the referendum that passed in the U.K.,” said Zimnisky.

“When you look at the potential bidders of a stone that’s close to a hundred million dollars, you know these are wealthy individuals and investors that have a lot of exposure to financial assets that sold off last week with that news.”

Lamb said there isn’t enough information to make a true assessment how much the so-called Brexit vote influenced the low bids at the auction, but he acknowledged it may have been a factor.

“It might have created a bit of uncertainty, a little bit of volatility, when people start to question whether it is going to have a major impact on the overall financials in maybe three to six months time,” said Lamb.

He said the diamond is now off the auction shelf but he has heard of interest from other private buyers.

Sotheby’s touted the diamond as the largest gem quality rough diamond to be discovered in over a century and the largest known to exist today.

The auction house said the Lesedi La Rona diamond is second in gem-quality size only to the Cullinan Diamond, which was discovered in 1905 and later cut into nine smaller diamonds.

The name Lesedi La Rona means “our light” in the Tswana language spoken in Botswana where the diamond was found last November.