The program is scheduled to be completed in 2020. The 17 renovated cars, which were originally built in 1950, will be deployed over VIA Rail's long-haul routes 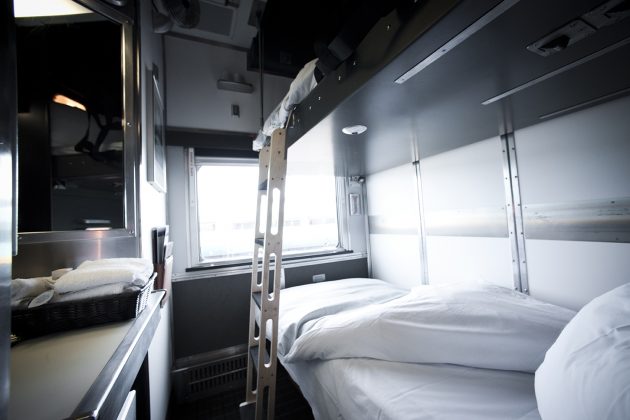 A look inside the Manor sleeping car, a cabin for 2 in its Night-time configuration on the Toronto-to-Vancouver line. PHOTO: VIA Rail Canada inc.

Built in the 1950s, the renovations will be used to transform the cars into a new generation of fully accessible cars, and will elevate the standards of accessibility in Canada.

The contract awarded to Bombardier will allow for the stainless steel cars to become fully accessible. The interior layout of the cars was designed in compliance with modern accessibility standards and future requirements that are currently under development in order to provide a superior level of accessibility.

Each reconfigured car will be equipped with:
• two wheelchair lifts;
• two accessible spaces with anchoring devices;
• announcement display screens, including in the washrooms;
• an accessible washroom.

The work will also include the installation of Wi-Fi devices, improved interior design of the cars and mechanical upgrading of the heating system and various electrical components.

The program is scheduled to be completed in 2020. The 17 renovated cars will be deployed over VIA Rail’s long-haul routes.