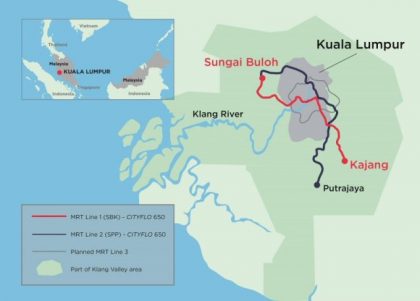 The 52.2-kilometre line will connect two districts on the outskirts of Kuala Lumpur. PHOTO: Bombardier

BERLIN—The rail division of Canadian transport giant Bombardier Inc. and a Malaysia partner have won a major infrastructure contract to provide the rail control and signalling system for a new 52.2-kilometre transit line outside Kuala Lumpur, Malaysia, building on the company’s previous success in the Southeast Asian country.

The Bombardier Transportation-Global Rail Sdn. Bhd. consortium have signed a US$106 million deal to deliver the rail system for the second line of the country’s new Klang Valley Mass Rapid Transit network, which connects Sungai Buloh, Serdang and Putrajaya.

“Winning this second rail control contract for the KVMRT network reflects our customer’s confidence in our technology and delivery, and the value we place on building long-term partnerships in our markets,” Peter Cedervall, president of Rail Control Solutions at Bombardier Transportation, said.

The Montreal-based company’s share of the work is worth $54 million.

Under the contract, Bombardier will provide the line with its CITYFLO 650 CBTC driver-less operating system as well as onboard equipment for 58 vehicles.