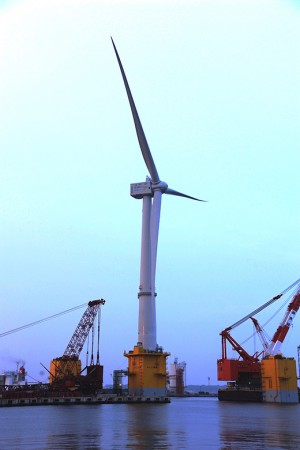 The mammoth structure was towed approximately 23 kilometres from Onahama Port to the site of the energy project off the coast of Fukushima on July 29. Moorage and cable work has now begun as the consortium attempts to get the turbine online.

The Offshore Hydraulic Drive Turbine has a rotor height of 105 metres, 80-metre blades and a rotor diameter of 164 metres. Once the moorage and cable-laying work is completed later this year, the turbine will contribute 7 megawatts to the mainland electricity grid. For comparison, a popular onshore model, the GE 1.5 megawatt, used in projects such as Canada’s largest wind energy installation outside Shelburne Ont., stands just 80 metres, and has a rotor diameter of 77 metres.

The consortium is led by Marubeni Corp., and involves nine other companies, including Mitsubishi Heavy Industries, which supplied the turbine. It is funded by the Ministry of Economy and designed to develop and test the technology for further commercialization, as well as to bring new industry to the area of Japan devastated by the 2011 earthquake. The 7 megawatt turbine is one of three destined for the facility.