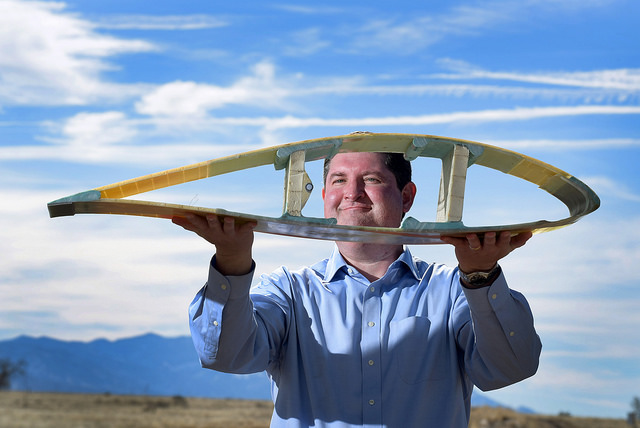 Sandia National Laboratories, a government lab managed by Lockheed Martin, with roots stretching back to the Manhattan Project, is spearheading research on a revolutionary new wind turbine. The enormous offshore design would stand hundreds of metres high and have enough generating capacity to single-handedly power a small city.

“The U.S. has great offshore wind energy potential, but offshore installations are expensive, so larger turbines are needed to capture that energy at an affordable cost,” Todd Griffith, the project’s lead blade designer and technical lead for Sandia’s Offshore Wind Energy Program, said. 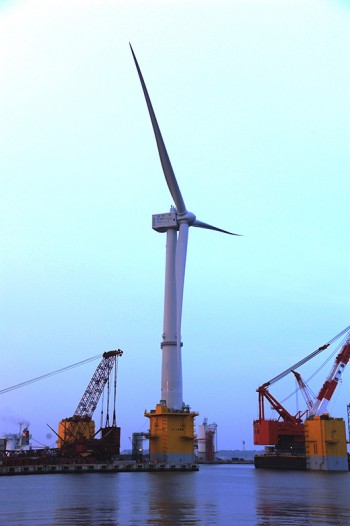 The research team’s design will dwarf even the largest turbines in operation, and would make the one or two-MW turbines common onshore across the world appear absolutely miniature. For comparison, the world’s largest current offshore wind turbine was anchored off the shore of Japan last year; it employs 80-metre blades and has a generating capacity of seven MW.

The new design, however, includes blades 200-metre long—twice the length of a football field—and offers a whopping 50-megawatt generating capacity.

The project, which is funded by a U.S. Department of Energy through the Advanced Research Projects Agency-Energy program, would require a tower that stands well over 200 metres high, while the blades would extend more than 400 metres above the water—approximately three-quarters the height of Toronto’s CN Tower.

With blades more than two-and-a-half times the length of any technology currently in use, Griffith said the “exascale” turbine would take advantage of economies of scale, and build on the research Sandia has already put into a 13-MW, 100-metre blade system.

“While a 50-MW horizontal wind turbine is well beyond the size of any current design, studies show that load alignment can dramatically reduce peak stresses and fatigue on the rotor blades. This reduces costs and allows construction of blades big enough for a 50-MW system,” the researchers said. 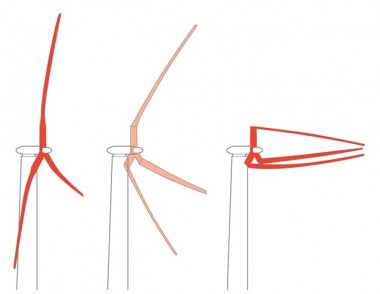 The turbine’s blades would be segmented, allowing them to be stowed during severe storms, such as hurricanes, to prevent damage. PHOTO: TrevorJohnston.com/Popular Science

The size of the blades is just one of the design’s novel features, however.

“Conventional upwind blades are expensive to manufacture, deploy and maintain beyond 10-15 MW. They must be stiff, to avoid fatigue and eliminate the risk of tower strikes in strong gusts. Those stiff blades are heavy, and their mass, which is directly related to cost, becomes even more problematic at the extreme scale due to gravity loads and other changes,” Griffith said.

To solve the stiffness problem, the researchers have designed segmented blades that use a trunnion hinge near the hub that allows them to reduce cantilever forces by responding to changes in wind speed.

Unlike conventional turbines built with their rotor blades upwind of the tower, the researchers said the new downwind design is “bio-inspired” by the way palm trees move in storms, and would use a series of cylindrical shells that bend in the wind while retaining their stiffness.

“This alignment radically reduces the mass required for blade stiffening by reducing the forces on the blades using the palm-tree inspired load-alignment approach,” they said.

Along with scientists from a range of universities and research centres, Dominion Resources, General Electric Co., Siemens AG and Vestas Wind Systems are among the project’s corporate partners.

Though a whole host of hurdles, both practical and theoretical, remain, the project demonstrates an ambitious step toward better utilizing offshore wind energy.