Unlike traditional offshore turbines, which are mounted to the seabed, floating turbines use ballast to float atop the waves 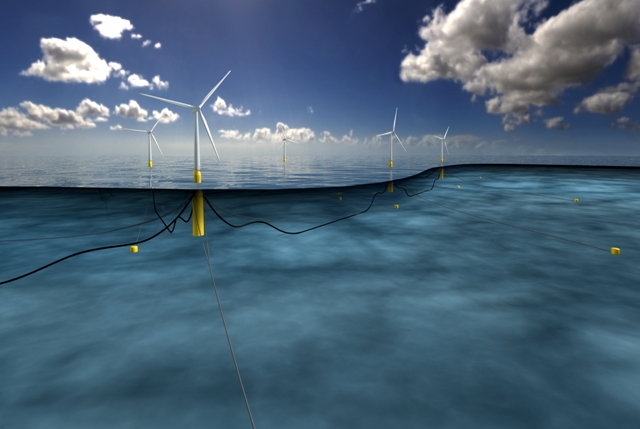 Seabed lease in hand, Norwegian energy company Statoil intends to move ahead with plans to install a series of five floating turbines in waters more than than 100 metres deep about 25 kilometres off the Peterhead, Scotland coast.

The subject of considerable research and development worldwide, floating turbines do not sit on towers attached to the seabed like traditional offshore turbines. Instead, the technology—which is evolving in several distinct forms—uses ballast to keep a turbine afloat, while mooring cables keep the unit in place. Until now, the technology has been limited to small-scale demonstration projects. 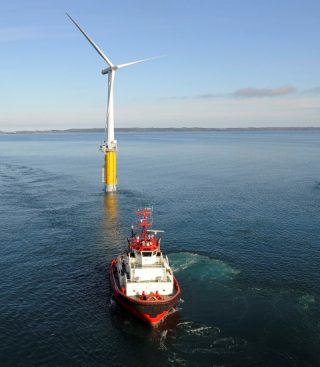 The Hywind demonstration turbine in the North Sea. Statoil launched the project in 2009. PHOTO: Øyvind Hagen/Statoil

“Statoil is proud to develop the world’s first floating wind farm,” Irene Rummelhoff, Statoil’s executive vice-president for New Energy Solutions, said when the project was first announced last year. “Our objective with the Hywind pilot park is to demonstrate the feasibility of future commercial, utility-scale floating wind farms. This will further increase the global market potential for offshore wind energy, contributing to realising our ambition of profitable growth in renewable energy and other low-carbon solutions.”

Statoil’s Hywind Scotland Pilot Park will incorporate a handful of six-megawatt floating turbines, and builds on technology the oil and gas giant has tested on a smaller scale. The company launched a single-turbine demonstration project off the coast of Norway in 2009.

The Hywind turbines consist of a wind turbine on top of a ballasted steel cylinder. The floating element extends 100 metres beneath the surface of the water, and is fastened to the seabed by three anchor piles, meaning the unit is simultaneously pushed upward by the ballast, and held in place by the mooring cables.

Statoil plans to commence work on the project later this year, and thinks the design could open up a significant new market for offshore wind. In the past, projects have been limited to areas where water is relatively shallow as a result of the cost of building larger seabed towers. In addition to opening wide swaths of ocean to development, the turbines can also often generate more energy than towers in traditional locales as a result of higher, more consistent offshore winds.