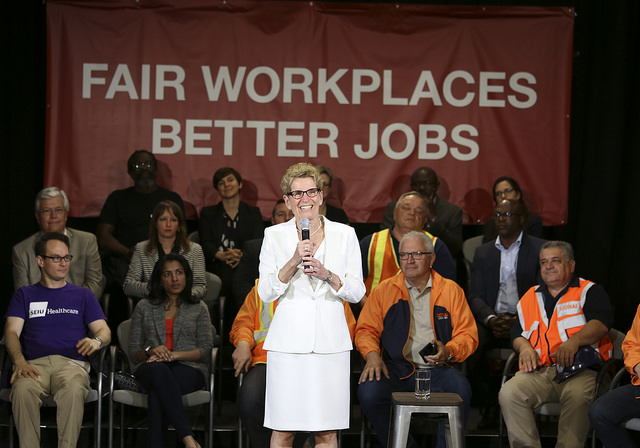 TORONTO—As Ontario companies reluctantly adjust to the province’s new $14 minimum wage, Queen’s Park is hiring up to 175 new enforcement officers to crack down on workplaces not abiding by the new labour laws.

Along with increasing the minimum wage to $14 per hour—a number that will jump to $15 per hour next year—the province rewrote a series of workplace rules last year that came into effect Jan. 1. Included in the slew of new regulations are mandatory paid sick days for all workers, guaranteed equal pay for part-time employees and changes to scheduling requirements for shift workers.

Many individual companies and business groups have criticized the changes, saying they could lead to cutbacks.

Following a high-profile decision by a number of Tim Hortons franchisees to eliminate paid breaks and other job perks in wake of the wage changes at the beginning of the year, the Liberal government vowed to crack down on companies using illegal means to offset added costs. Ontario Premier Kathleen Wynne also publicly blasted the coffee chain’s franchisees for the decision.

A week later, along with hiring up to 175 new enforcement officers to ensure companies are up to code on the new employment standards, the government is increasing fines for firms found in violation.

Fines for employer non-compliance with the Employment Standards Act that once ran $250, $500 and $1,000 for first, second and third offences, are being upped to $350, $700 and $1,500 respectively. Ontario also plans to begin publishing the names of companies and employers that don’t meet the standards.

While the Ontario government maintains the labour changes were the right thing to do, industry groups such as the Canadian Federation of Independent Businesses have called the changes politically-motivated. The long-ruling Liberal government faces an election this year.