Labour Minister Kevin Flynn said most companies are complying with the legislation, but some business owners have been taking the increased pressure out on their workers 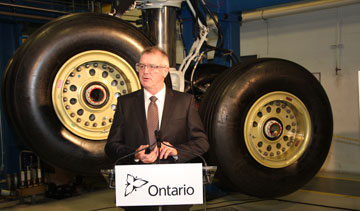 TORONTO—Ontario is vowing to crack down on companies that break the labour laws as they try to offset the added costs of a higher minimum wage, but some are accusing the Liberal government of scapegoating business for electoral gain.

The province’s minimum wage increased on Jan. 1 from $11.60 an hour to $14—and is set to rise again to $15 in 2019—as part of sweeping labour reforms that also include increased personal emergency days and paid vacation time.

Business groups had warned that the increase was too quick to absorb the additional costs, especially for small businesses.

Labour Minister Kevin Flynn said Jan. 8 that most companies are complying with the legislation, but some business owners have been taking the increased pressure out on their workers.

“It’s the act of bullies that has no place in this province,” he said. “I really hope that the businesses that have acted in this manner decide on sober second thought to reverse the decisions they’ve made.”

A pair of eastern Ontario Tim Hortons franchisees—who happen to be the children of the company’s billionaire co-founders—have made headlines for cutting paid breaks for their employees and forcing them to cover a bigger share of their benefits. Flynn said that goes against the spirit, though not the letter, of the law.

Premier Kathleen Wynne phoned reporters last week on a day marked private on her itinerary to publicly accuse the franchisees of “bullying” their employees.

That remark and the government’s approach to the labour changes is all “carefully thought out” and politically motivated, said a representative for the Canadian Federation of Independent Business.

“The government, in anticipation of the upcoming (June) election, is trying to set up a battle pitting employer against employee,” said Julie Kwiecinski, the director of provincial affairs for Ontario.

Flynn defended the new legislation, saying that regardless of when it was passed, it was the right thing to do.

But the Opposition said the Liberals want people to be talking about the minimum wage because it means they’re not focusing on other parts of the government’s record.

“They want to make business the bogeyman,” said Progressive Conservative John Yakabuski. “This is a political vehicle for June of 2018 and (the Liberals have decided), ‘We’re going to make somebody the enemy and we’re going to portray ourselves as the dragon slayer.”’

NDP Leader Andrea Horwath noted her party has been pushing for a $15 minimum wage for years and the consequences being seen now could have been avoided if the increases had started long ago.

“Kathleen Wynne had to wait until it was politically opportunistic for her to implement the wage (increase) all at once,” she said. “Unfortunately, it left businesses in a scramble and it’s also left some workers still pretty vulnerable.”

Flynn wouldn’t confirm any specific ministry investigations, but said inspectors are being sent anywhere contraventions are reported. He mentioned a story about an east Toronto Tim Hortons franchise allegedly banning workers from keeping tips, saying it clearly contravenes the legislation.

“In some cases it appears (businesses) have gone to the point of doing things that are alleged to be illegal,” Flynn said. “We’re investigating these charges. The information that came out of Scarborough on the tips, where employees were … alleged to have been asked to put their tips into the till, that clearly contravenes the legislation. So it’s not just mean spirited, it’s also illegal.”

The ministry is hiring up to 175 new employment standards officers and is stepping up enforcement. The goal is for all claims to be resolved within 90 days and to have one in 10 workplaces proactively inspected every year, Flynn said.

The new labour legislation includes increased penalties for employers that violate the law, streamlined collection methods and the ability of the ministry to impose interest on money owed to workers. The law also lets the government publish the names of employers that break the rules, something Flynn said it is “very willing to do.”

Calls to the ministry about employment standards violations have been up recently by about 30 per cent, Flynn said, though most are from people with questions about the new laws.