Ratcheting up tensions with the Montreal-based manufacturer, Metrolinx has signed a $528 million deal with one of the company's chief competitors 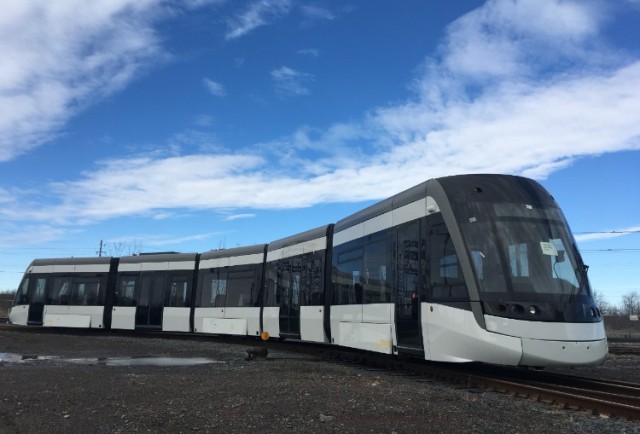 One of the Bombardier-built test vehicles for the Eglinton Crosstown light rail project. The delivery of the vehicles has become a flashpoint between the company and Ontario. PHOTO: Bombardier

TORONTO—The Ontario government has turned to a French manufacturer for light-rail vehicles as a backup plan if Bombardier fails to deliver for transit projects in Toronto—a significant concern the provincial transit agency has been raising.

Ontario has reached a $528-million agreement to buy 61 light-rail vehicles from Alstom in case Bombardier is found to be in default at the end of a court-ordered dispute resolution process.

The announcement ratchets up a dispute between the government and Bombardier over the company’s ability to fulfil train orders in a city where gridlock has become an increasing frustration for hundreds of thousands of commuters.

Transportation Minister Steven Del Duca said May 12 that process could take up to a year, and if Bombardier “continues to fall even further behind,” the transit projects will be further delayed.

“Over the past many months, Metrolinx has had extremely serious concerns regarding Bombardier’s ability to deliver quality vehicles according to the contract schedule,” Del Duca said. “For example, the pilot vehicle that Bombardier presented this past winter, which was late, couldn’t move under its own power.”

This agreement gives Ontario more certainty that the Finch West and Eglinton Crosstown will open on time in 2021, he said.

“Alstom Canada is currently delivering quality vehicles on time for Ottawa’s Confederation line LRT,” he said. “Alstom vehicles are comparable in price. Alstom Canada is the only other supplier in North America able to meet the same high level of accessibility as Bombardier.”

Alstom Canada will also open an assembly facility in the Greater Toronto and Hamilton Area to deliver on the contract, Del Duca said, touting the job creation benefits.

Bombardier did not immediately respond to a request for comment.

Prime Minister Justin Trudeau, speaking Friday north of Toronto, was asked to weigh in and said Ontario makes its own choices.

“In general we tend to respect the opportunity and the responsibility of municipalities or provinces to make decisions around procurement that is going to be based on both what they offer their citizens in terms of services and the price they’re asking their taxpayers to pay,” he said.