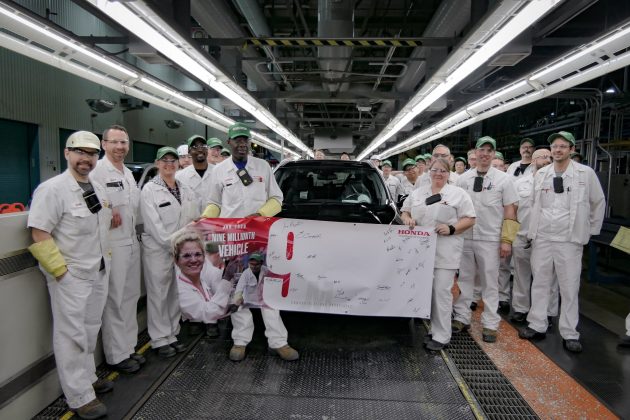 MARKHAM, Ont. — Honda Canada Inc. has reached two significant milestones in Canada: the automaker has produced its nine millionth vehicle at its Alliston, Ont. manufacturing facility, and sold its five millionth vehicle in the country.

Honda Canada is marking 50 years of operations and 34 years of vehicle production in Canada.

Honda’s Alliston complex built its first vehicle in Canada in 1986, and subsequently added a second assembly plant and an engine plant. Honda’s total investment in Canadian operations is $4.2 billion.

In 2014, Honda invested $857 million to modernize technologies and processes in preparation for production as the global lead plant for the tenth generation Honda Civic.

Dave Gardner, president and CEO of Honda Canada Inc., said in a prepared statement, “We are very proud of how we’ve grown, how we’ve invested in Canada and the fact that so many Canadians are part of the Honda family. I want to express my sincere thanks to everyone who has contributed to our success and I’m looking forward to our bright future here in Canada.”

Honda’s first vehicle built in Canada was an Accord Sedan. Today, Alliston builds Honda cars and light trucks, including the CR-V and the Civic. Other vehicles that have been produced in Canada include the Odyssey, Pilot, Ridgeline and several Acura models.

Honda’s Canadian manufacturing plant has a capacity to produce 400,000 vehicles and 260,000 four-cylinder engines, and sources parts and goods worth $2.1 billion from Canadian suppliers.