Automaker bringing popular five-door back to Canada and U.S. after 10-year absence, but no new work for Alliston, Ont.'s Civic sedan assembly plant 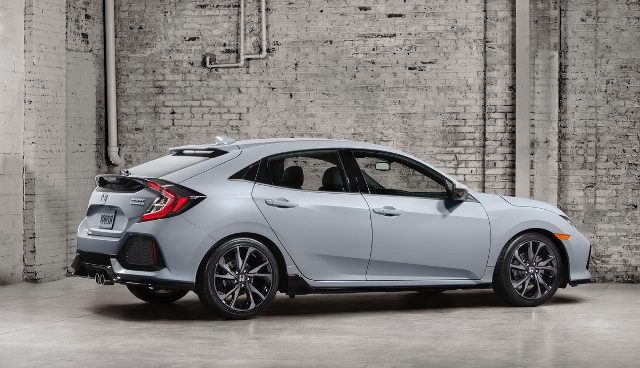 The new vehicle will ship in five different models and offer up to 180 horsepower. PHOTO: Honda

TORRANCE, Calif.—Honda Motor Co. is bringing the Civic Hatchback back to North America after a ten-year absence.

The company has announced the new five-door vehicle will join its lineup of 10th-generation Civics starting this fall. The new car will include a four-cylinder 1.5-liter DOHC direct-injected turbo engine under its hood, offering 180 horsepower in the highest-end model.

“The Civic Hatch has been a staple for Honda in Europe, but has long been the forbidden fruit for Honda fans in the U.S.,” Jeff Conrad, senior vice-president and general manager of the Honda Division for American Honda Motor Co., Inc, said. “Now, we’re bringing this sporty, stylish and versatile Civic Hatchback to North America, as we amp up the performance of our incredible Civic lineup with each new Civic model.”

Unlike the Civic sedan, which is built locally in Alliston, Ont., the Japanese automaker plans to ship the hatchback across the Atlantic from its manufacturing plant in Swindon, U.K.

The vehicle will be the first five-door included in Honda’s North American Civic line. The company retired a previous three-door iteration of its Civic Hatchback in the Canadian and U.S. markets after 2005.

The new lineup will be composed of five different models— the LX, Sport, EX, EX-L, and Sport Touring—all of which include the turbocharged four-cylinder engine, while a six-speed manual transmission is an option for the LX, Sport, and EX.

Honda anticipates fuel economy ratings of 31/40/34 mpg (city/highway/combined), which the automaker says will put the new 2017 hatchback at the top of its class.

The new Civic will hit dealerships in the U.S. this fall.