The Civic purports to mark a renewed focus on core Honda design values, with a more simple and clean interior design. 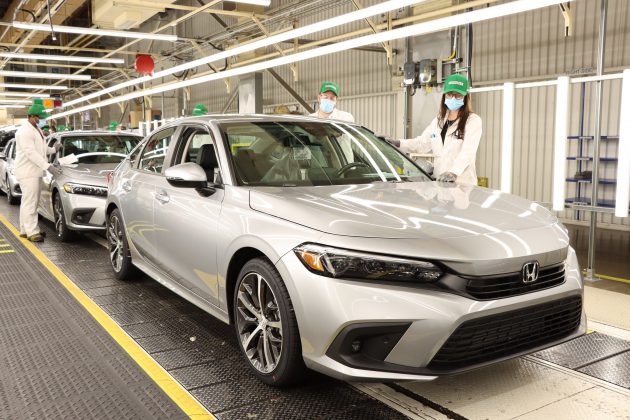 ALLISTON — Honda has officially commenced production of the 2022 Honda Civic Sedan at Honda of Canada Mfg. (HCM) in Alliston, Ontario.

For the first time, the Civic Hatchback will be manufactured in the U.S., at the company’s Greensburg, Indiana plant. All Civic production in North America will use domestic and globally-sourced parts.

As Honda’s longest-running automotive nameplate, North Americans have purchased more than 14.2 million Civics since 1973. Every Honda Civic Sedan sold in Canada is manufactured at HCM. With sales of more than 1.65 million units over the last five years, Civic has been the No. 1 model in the U.S. with first-time buyers, Millennials, Gen Z and since the launch of the 10th-gen model in 2015.

The Civic purports to mark a renewed focus on core Honda design values, with a more simple and clean interior design, a direction that also will shape the design of future Honda models.

“What we have accomplished with the Honda Civic, is taking it to a higher level of sophistication,” says Clement D’Souza, Senior Vice President of HCM. “We’ve created this clean and modern look by using new and first-time Civic technologies, which resulted in the most technologically advanced Civic ever, with a refined and innovative design.”

Faced with travel restrictions due to the global COVID-19 pandemic that prevented Honda R&D engineers from Japan and the production engineering team in the U.S. from coming to Canada, HCM engineers took on a larger role in preparing the 2022 Civic Sedan for mass production.

Using extensive application of structural adhesive, the team created a more rigid body for the Civic.

Extensive use of aluminum, including an aluminum hood for the first time in the Civic Sedan, helps enhance fuel efficiency.

A new soft and seamless instrument panel surface required an entirely new production process, helping create a simpler design to eliminate visual clutter that might reflect in the windshield and enhance the ease of driving.

Installation of a new honeycomb mesh panel that stretches across the front of the instrument panel hides air vents while providing a simpler appearance.