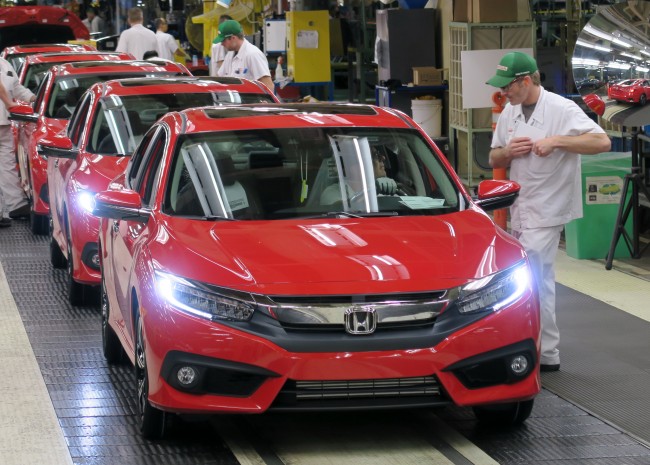 Honda celebrated the first mass production of the 2016 Civic Tuesday at its Alliston, Ont. facility. Between HCM’s two plants, it is able to produce 400,000 vehicles annually. PHOTO: Honda

ALLISTON, Ont.—The assembly lines at Plant 1 of Honda of Canada Mfg. came to a rare halt Oct. 20 as the first 2016 Honda Civic rolled off the line amid a crowd of cheering workers and a whole host of visitors from around the world.

The 10th generation Civic, which the company called the “most ambitious” remake in the 43-year history of the model, will go on sale globally later this year, and marks a distinct milestone for Honda Canada Inc. and the Alliston, Ont. plant.

“For the first time in Honda’s history, the lead plant for a new global model was located outside Japan,” Dan Smith, president of Honda of Canada Mfg., said at the launch. “The civic is Honda’s highest-volume global car and it’s built in eight countries. Honda Motor put their trust in the North American regional team to lead this development and manufacturing challenge. I know Honda’s commitment was a good call.” 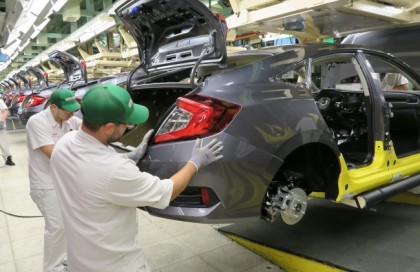 In addition to being the first plant in the world to launch the 2016 Civic into mass production, the Ontario facility will be responsible for developing the processes and tooling that will form the manufacturing base at all Civic plants around the world. The company first was made possible by an $857 million 2014 investment that will innovate Honda’s Canadian facilities with new technologies and processes over three years.

Employing a finely-tuned assembly process, a new Civic will rattle off the line every 63 seconds while lines are running. Each vehicle takes 13 hours to venture along the plant floor from the general welder—where the frame legally becomes a vehicle—to the end of the line. Between Plant 1 and Plant 2, which builds Honda CR-Vs, the Alliston facility can produce 400,000 vehicles annually, as well as 260,000 four-cylinder engines at its adjacent engine plant. The three plants have a combined footprint of more than 376,000 square-metres on Honda’s 760-acre property.

Approximately 75 per cent of the Civics produced at the facility make their way to U.S. market, 23 per cent are sold in Canada, while 2 per cent hit the market in Latin America. Each vehicle is tested rigorously on the 1.7-kilometre test track before it leaves the facility. The vast majority of the vehicles leave the Alliston plant by rail, while 10 per cent are loaded onto trucks, reaching local dealers 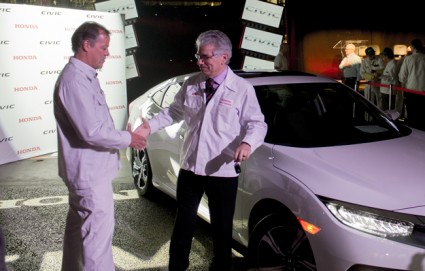 The Civic has been Canada’s best-selling passenger car for 17 years, a figure the Japanese company hopes to improve to 18 with the latest redesign.

“Civic is a vehicle that Canadians have grown to trust. This tenth generation model will continue to set a new benchmark in the compact class with fun-to-drive performance, fuel efficiency and safety performance, together with a new level of refinement,” Jerry Chenkin, president and CEO, Honda Canada Inc. said in a statement. “Canadians can also take pride in knowing that every Civic coupe, sedan and Si model sold in Canada is made right here in Ontario, for Canadians, by Canadians.”