Ontario auto industry gets a boost as carmakers clash with Trump over Mexico operations, threatened border tax in U.S.

January 10, 2017  by Canadian Manufacturing.com Staff, with files from The Canadian Press 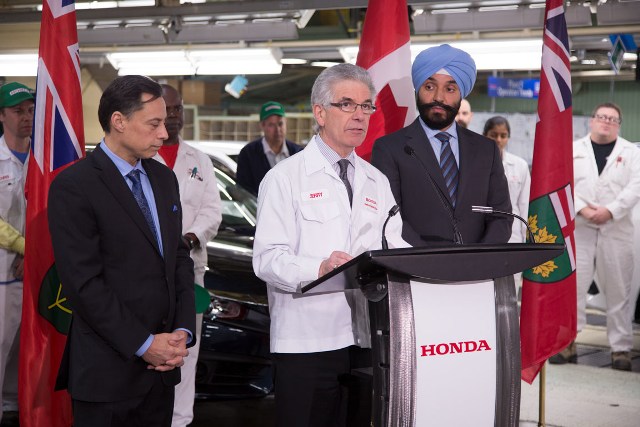 The investment will cover the cost of a new paint shop and a range of upgrades at Honda’s Alliston, Ont. campus, where the Japanese automaker builds the Civic, CR-V and four-cylinder engines.

Both the federal and provincial government will commit $41.8 million to the project, or about 17 per cent of the total cost, securing thousands of jobs north of Toronto—though the fresh investment is not expected to create any new positions.

Honda said the new paint shop will reduce its greenhouse gas emissions by 44 per cent compared to its current paint operation, while the nearly half-billion-dollar investment will support a number of other modernization efforts over the next three years.

Ontario has provided hundreds of millions of dollars in grants to automakers in the past several years, including up to $85.7 million to Honda in 2014 for its Alliston plant, $85 million to Fiat Chrysler last year for an expansion of its minivan assembly plant in Windsor, $42.1 million to Toyota in 2015 for upgrades at its Cambridge assembly plant and a new line in Woodstock, and $70.9 million in 2013 to Ford for its Oakville assembly plant.

Ottawa has also handed out millions in grants during that time, and federal Economic Development Minister Navdeep Bains said the sector is a key driver of economic growth.

“This investment in Honda of Canada will bring significant economic and environmental benefits to Canada both now and in the long term,” he said in a statement. “It will keep our industry competitive and ensure that well-paying middle-class manufacturing jobs stay in Canada.”

Honda’s Alliston plant has capacity to build approximately 400,000 Civic and CR-Vs each year, as well as a quarter-million engines.