Ford’s new GT supercar to be built in Markham, Ont.

A trio of new performance-oriented Ford vehicles made their Canadian debuts at the 2015 Canadian International AutoShow (CIAS) in Toronto—including the second generation SVT Raptor pickup and Shelby GT350R Mustang—but none was more important for the Canadian auto industry than the GT.

“You cannot really talk about innovation without talking about this vehicle,” Hinrichs said of the new GT during media day at the CIAS. 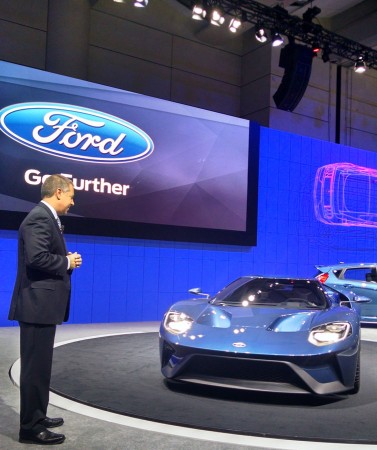 The GT will boast a carbon fibre passenger cell, including integrated driver and passenger seats, and aluminum front and rear subframes, while the body will be made of structural carbon fibre panels.

“I think it has a lot to do with their ability to use different types of material like carbon fibre that we don’t have the expertise to do so in our main facilities,” Bill Rowe, director of marketing with Ford of Canada Ltd., said of choosing Multimatic to build the car.

“It’s definitely a feather in the cap for Ford of Canada and Multimatic when it comes down to the manufacturing footprint here in Canada. The (production) volumes are going to be rather low, so it’s not going to be mass production by any stretch, but to bring this level of automobile into our footprint is just an amazing thing.”

The engine of choice for the new GT will be a 3.5-litre twin-turbocharged EcoBoost V6 that makes “more than 600-horsepower,” according to Hinrichs.

That same engine powered a Chip Ganassi Racing prototype car to three victories in the inaugural TUDOR United Sports Car Championship season in 2014, including a win at the 12 Hours of Sebring.

Ford said the production version of the engine will feature an all-new port/direct dual fuel-injection setup and a low-friction roller-finger-follower valvetrain, and will be mated to a seven-speed dual-clutch transaxle.

Choosing Multimatic to build the latest iteration of the famed GT—with a history dating back to the 1960s with the Ford GT40—all but cements Ford’s rumoured return to the 24 Hours of Le Mans race.

Multimatic Motorsports, the company’s competition arm, has been racing Ford products since its inception in 1992.

Multimatic operates nine manufacturing facilities around the world, including three in the Greater Toronto Area (GTA).

Production of the 2016 GT is set to get underway later this year.