Automakers expected to showcase their latest gadget-filled vehicles, incorporating technology like never before 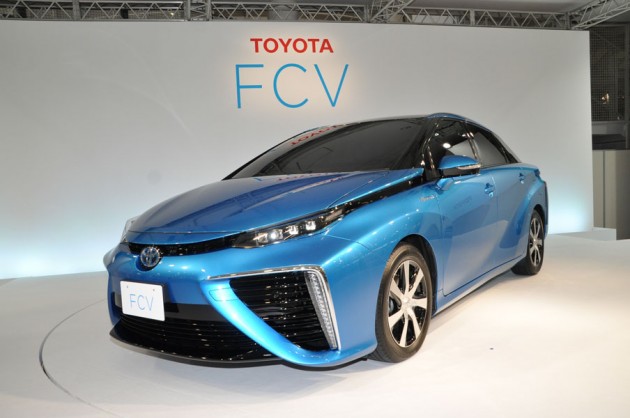 Toyota’s Mirai fuel cell vehicle. With Honda expected to unveil its own FCV, the market for hydrogen autos is expected to begin heating up. PHOTO: Toyota

TOKYO—The Tokyo Motor Show, opening to the public Oct. 30 at Tokyo Big Sight convention hall, will be packed with futuristic eye-catching vehicles that drive themselves, offer online information in dazzling ways and are so green they are zero-emissions. Taking part with their latest offerings are 160 companies, including automakers, suppliers and motorcycle manufacturers from around the world, but the biggest stars of the Tokyo show are usually the Japanese. There will be 42 “world premiere” vehicles, being unveiled for the first time.

Honda Motor Co. is gearing up to challenge Toyota Motor Corp.’s Mirai fuel cell vehicle, which is already on sale, with its own fuel cell car, whose name is set to be announced at the show. It is promised for the Japanese market by the end of March 2016, and set for the U.S. market after that. Fuel cells are hot lately because they have zero emissions, running on the energy created when hydrogen stored in a fuel tank combines with oxygen in the air, and only spits out water. But it is a relatively expensive technology. The Mirai went on sale in the U.S. this month for US$57,500 and Toyota plans to sell more than 3,000 Mirai cars in the U.S. by the end of 2017. Mirai, which means “future,” went on sale in Japan in December for 6.7 million yen (US$56,000). In both places, it qualifies for green rebates. Toyota has received 1,500 orders for the Mirai in Japan. The key feature of the new Honda fuel cell is that the fuel stack is smaller and can fit under the hood where the gas engine usually is, instead of in the bottom, under the seats. This allows more cabin room, making Honda’s fuel cell the first model, planned for commercial production, to seat three people in the back. It travels more than 700 kilometres (430 miles) on a full tank, beating Mirai’s 500 kilometres (310 miles). Toyota is also planning to show a revamped fuel cell, although that’s a concept model without too many details.

The Japanese auto industry is worried how young people here are falling out of love with the car, and appear to be more interested in cellphones, literally spending most of their money on mobile services. Nissan Motor Co.’s Teatro for Dayz concept car is designed with that challenge in mind. The entire inside of the car works like a computer screen, where passengers, even drivers, thanks to self-driving technology, can engage in social media, check email and surf the Internet. Executive Design Director Satoshi Tai says car design usually accentuates power, quality and speed. But these values do not resonate with younger Japanese. “If anything, such car traits just call to mind old-fashioned technology that bears little relevance to their lives,” he said.

Toyota is showing a simplified and smaller version of the Kirobo robot, a talking humanoid designed by Tomotaka Takahashi, which went into space and returned last year. Kirobo Mini, at 10 centimetres (4 inches) when seated, fits on a person’s palm. It can’t do any heavy lifting, but it’s designed to be a mascot-like companion, raising both its arms in a greeting when it detects an approaching smiling face. Toyota has no immediate sales plans but hopes adding a cute robot will make driving more fun. It only speaks Japanese. Toyota co-operated on the Kirobo space project, working mainly on its voice recognition capabilities, along with the University of Tokyo, JAXA or Japan’s equivalent of NASA and other robotics experts. Toyota has shown robots in the past, including one that plays the trumpet, another that plays the violin, as well as a robot that works as a guide in a Toyota showroom. Honda’s famous walking talking humanoid Asimo is not set to be a major star at its booth this year.

Toyota is showing the fantasmic toy-like Kikai, which means “machine” in Japanese. The three-seater concept model that shows the parts of a car usually hidden from view, such as the fuel tank, exhaust pipes and the swiftly moving road underneath. Toyota engineers say the model, with no immediate plans for commercial production, emphasizes the idea of craftsmanship, simplicity and movement in a machine. “Monozukuri,” or the concept of “making things,” has long been idealized in Japan. Kikai looks like a cartoonish hodgepodge of parts, defying typical ideas of what a car should look like. “By removing the concealment of sheet metal, the concept expresses the intricate beauty of functional machines and reminds us of the pleasure of tactile contact with the material world,” Toyota said.