Quebec will strongly resist any compromises in trade talks with U.S.: Couillard 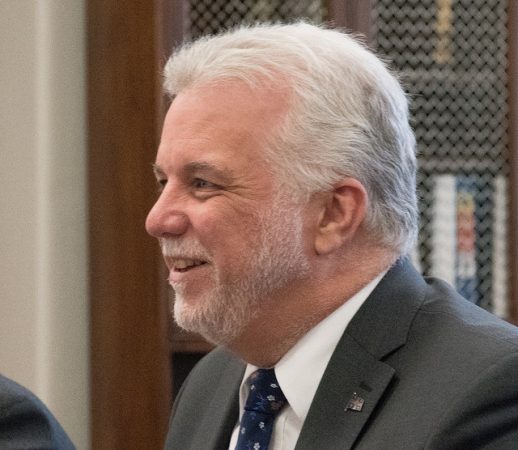 MONTREAL – Quebec Premier Philippe Couillard is talking tough on the question of supply management now that the focus switches to Canada after a new trade deal has been reached between the United States and Mexico.

“There will be no compromises by my government,” Couillard said Monday. “On that we will have to be excessively clear.”

The Quebec Liberal party leader made his declaration while campaigning for the Oct. 1 election in Trois-Rivieres, Que.

Couillard’s remarks came after President Donald Trump announced the U.S. and Mexico have reached a bilateral trade “understanding” that could lead to an overhaul – or perhaps the termination – of the three-country North American Free Trade Agreement.

Trump also invited Canada to rejoin trade negotiations with its NAFTA partners, while also threatening Ottawa that if it can’t reach a deal, then he will impose devastating tariffs on automotive imports.

Couillard admitted that the pressure on Canada will be enormous, but repeated several times to reporters that Quebec will strongly resist any compromises that are not acceptable.

“We won’t give our approval and won’t take part in a deal that’s against Quebec’s interests,” he said.

Couillard noted that Quebec is “also attached to what we call a cultural exception,” which he said directly affects the media and cultural organizations in Quebec.

He also said that diplomatic efforts have borne fruit, noting that “voices in the U.S.” have called for a trilateral agreement.

Couillard added that it would be difficult to do two separate bilateral agreements.

He told reporters that he has heard Prime Minister Justin Trudeau say to the U.S. that he would be flexible on the issue of dairy supply management.

Lisee added that he was worried that Canada was ready to make concessions on milk.

But Couillard maintained that Trudeau has always said he would defend supply management as well as Quebec’s cultural exception.

“I have no indication that Trudeau will make any compromises,” Couillard said.

Coalition Avenir Quebec Leader Francois Legault said Monday that Canada should sign a trade agreement with the U.S. and Mexico as soon as possible.

Legault said it’s crucial for the Quebec economy that a deal be reached among the three countries.

He made the comment in Sherbrooke, Que., during the fifth day of the 39-day provincial election campaign.

Legault said billions and billions of dollars are at stake for Quebec and he warned that well-paid workers would suffer a lot without a deal.