This is the second tranche of job cuts—totaling 14,000—announced by Bombardier this year while also asking for $2 billion in federal and provincial aid 14,000 cuts 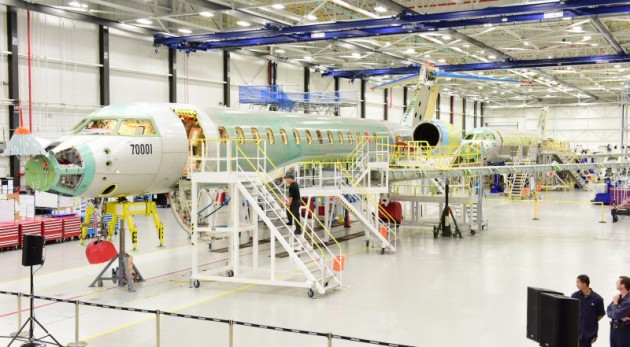 Bombardier said the latest round of job cuts designed to save about US$300 million a year. PHOTO: Bombardier

MONTREAL—A second large wave of job cuts is hitting Bombardier workers in less than a year as another 7,500 positions are to be eliminated around the world through the end of 2018.

In February, the Montreal-based plane and train maker announced plans to cut 7,000 positions by the end of 2017, including up to 2,000 contractors and 800 production development engineers.

In January of 2014 Bombardier announced 1,700 layoffs in its aerospace division, 1,100 of them in Montreal.

Bombardier said the latest round of job cuts designed to save about US$300 million a year are part of its recovery plan launched last year to improve its profitability and competitiveness by 2020.

“I know these aren’t easy decisions in the short-term but they are the right decisions to ensure the future of the company,” CEO Alain Bellemare said in an interview.

Having reduced the risk of the company last year, he said this step will make Bombardier stronger by cutting costs so it can keep investing and winning in both the rail and plane businesses.

The job losses will be partially offset by more than 3,700 strategic hirings as Bombardier ramps up production of its CSeries commercial jet and new Global 7000 business aircraft, along with delivering rail contracts to customers like the Toronto Transit Commission and Metrolinx.

Bombardier said it expects to record between US$225 million and US$275 million in restructuring charges starting in the fourth quarter.

The company said the latest restructuring will include the streamlining of administrative and other non-production related functions and creation of centres of excellence for design, engineering and manufacturing in aerospace and rail transportation.

The manufacturer has been struggling because of heaving spending on new aircraft, a slowdown in business jet demand and production challenges for its railway products. It also faces large pension obligations.

Federal Innovation Minister Navdeep Bains said Ottawa’s investment in the aerospace giant is not a matter of if but how will be done.

He said Ottawa wants Bombardier to keep its head office and the jobs connected to its research and development activities in the country.

Bellemare said the job cuts are necessary to ensure Bombardier’s long-term growth and have nothing to do with ongoing negotiations with the federal government.

He wouldn’t say if other decisions, including the rumoured sale of the Learjet business jet platform, are yet to come.

“We will continue to do what we need to do to ensure that the company is profitable long-term and that we have the necessary financial means to continue to invest in the new platforms so we can ensure the company’s growth in the long-term.”

On its website, Bombardier said it has 31,200 employees in aerospace and 39,400 in transportation.