Voters in more than 400 communities across Ontario cast ballots. In Toronto, John Tory took 63 per cent of the vote against rival Jennifer Keesmat's 24 per cent 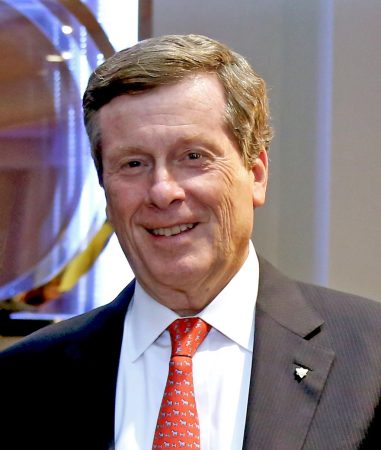 Toronto Mayor John Tory easily won re-election on Monday after a spirited campaign marked by unprecedented interference from the provincial government, while dozens of Ontario communities were forced to extend voting due to widespread technical difficulties.

Tory took 63 per cent of the vote while his main rival, former chief city planner Jennifer Keesmaat, took 24 per cent – giving the incumbent mayor a far more significant victory than when he was first elected four years ago.

“That’s quite an evening isn’t it,” Tory, 64, joked in his victory speech, calling his mandate historic. “I want to acknowledge Jennifer Keesmaat, who brought ideas forward which I’m sure we’ll discuss in the coming days.”

In all, voters in more than 400 communities across Ontario cast ballots for their next municipal government after campaigns that saw everything from legal battles to electoral reform. Residents in 51 municipalities experienced voting delays, according to the company providing online vote tabulation services.

For some residents, voting was to continue Tuesday after online systems suffered technical problems. Communities in Grey and Bruce counties, the Muskoka region, Bradford West Gwillimbury, the City of Waterloo, and Greater Sudbury all offered a second day of voting, along with five municipalities in eastern Ontario.

The province’s most high-profile race, however, proceeded smoothly, with few surprises.

Keesmaat, who had criticized Tory as weak and unwilling to stand up for Toronto after Premier Doug Ford slashed the size of the city’s council mid-race, was gracious in defeat.

“Mr. Tory has worked hard his whole life in political office, and I’m sure that our mayor will return to office determined to make his time there count,” she said in her concession speech.

Four years ago, Tory took only 40 per cent of the popular vote when he edged out Ford, who finished in second place with 33 per cent. Since then, Tory has positioned himself as a steady, experienced leader who could work with all levels of government.

Myer Siemiatycki, a professor of politics at Ryerson University, called Tory’s win “decisive,” saying he had only one real challenger this time as opposed to two in 2014. The right-of-centre Tory, however, will have to do more to win council to his side now, Siemiatycki said.

“This council will have a lot more opposition voices, as it were, to the mayor than the last council did,” Siemiatycki said. “It will be an interesting four years ahead – it will test Mayor Tory’s conciliatory abilities and talents, which are there but didn’t reach across the aisle in his first term.”

Preliminary voter turnout in Toronto was pegged at 47 per cent, compared to 54 per cent in 2014.

Brown edged out incumbent Linda Jeffrey for mayor. He had been forced to step down from his post as leader of the provincial party in January amid sexual misconduct allegations he denies.

“My party is the people of Brampton and I want results,” Brown said in a victory speech that made no reference to his previous troubles. “Brampton is going to be the envy of Ontario.”

Brown was not the only former provincial legislator to relaunch a political career mere months after being swept from power.

At least one scandal-plagued local leader went down to defeat. Whitchurch-Stouffville Mayor Justin Altmann was investigated by the town’s integrity commissioner after reports of a police-style photo gallery on his washroom wall containing images of residents, journalists and politicians. Council docked him six months pay and barred him from entering his office other than to collect mail or attend meetings.

Many other incumbents fared better, including the longest-serving municipal leader in the province. Gord Krantz, 81, was re-elected as mayor of Milton, a post he’s held since 1980. Other returning incumbents included Jim Watson of Ottawa, Drew Dilkens of Windsor, Hamilton Mayor Fred Eisenberger, and Jim Diodati of Niagara Falls.

In Toronto, some candidates with last names that carried a degree of political cachet were able to clinch victory on council.

For the communities where voting was to continue, Dominion Voting, a provider of online tabulation services, offered an apology, blaming technical issues on an unnamed Toronto provider. Dominion said the issue was resolved after about 90 minutes, but many voters still had problems.

“At no time was the integrity of the system at risk of compromise, or in any way insecure,” it said in a statement.

Results were also slow in coming from London, Ont., the only Canadian municipality to use ranked ballots in a local election. The system allows voters to choose three candidates in order of preference. Cambridge and Kingston were considering whether to adopt the system for the municipal election in 2022.

According to the Association of Municipalities of Ontario, 6,645 candidates ran in local council races, with 9.2 million people eligible to vote.