The union said almost 9,000 workers in the Greater Toronto Area would walk off the job Tuesday at 12:01 am ET 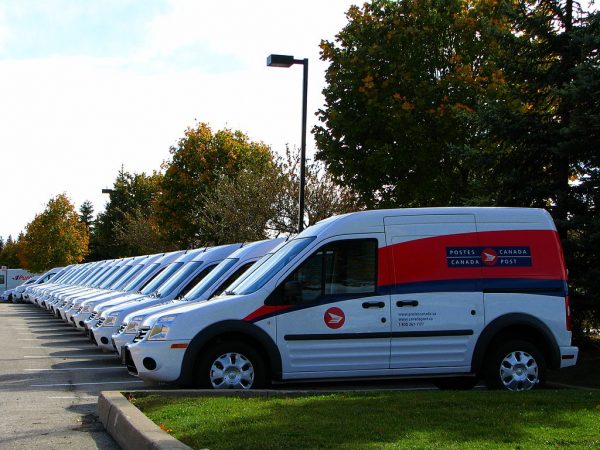 PHOTO: GTA postal workers are expected to walk off the job on Tuesday/Michael Gil, Toronto, via Wikimedia Commons

OTTAWA – Small businesses called for a speedy end to rotating walkouts launched Monday in four cities by Canada Post employees, citing concern that a prolonged strike could chew into their profits ahead of the busy holiday shopping season.

The Canadian Federation of Independent Business also urged the post office to rein in spending to reduce costs and warned postal workers that continued job action could hurt them and their employer.

“While a rotating strike may be less harmful than a general strike, it creates additional uncertainty for businesses at a critical time for many small firms,” CFIB president Dan Kelly said Monday in a statement.

“The bad news for Canada Post workers is that every time they even threaten a strike, more small business customers move to use alternatives, many never returning to Canada Post.”

The union said almost 9,000 workers in the Greater Toronto Area would walk off the job Tuesday at 12:01 am ET.

“For us to reach any agreements, Canada Post has to talk about the changing nature of postal work and the issues that stem from the growth of parcels,” Mike Palecek, CUPW national president, said in a statement Monday night.

“We need to address health and safety concerns and precarious work, as well as gender equality. We will stay at the bargaining table and on the picket line for as long as it takes to get a fair deal for our members.”

Customers across Canada may experience delays for parcel and mail delivery since Toronto is a key processing hub, Canada Post said in a statement Monday night.

“The union’s rotating strike will, therefore, have a significant impact on our operations,” spokesman Jon Hamilton said. “Canada Post will make every effort to minimize the impact.”

The two sides have been bargaining separate contracts for rural and urban carriers, without success, over the past 10 months but there has been little progress in resolving critical issues, Palecek said.

The union is also asking for gender equality language to be incorporated in any new deal and want an end to forced overtime.

Canada Post said Monday it is committed to bargaining new collective agreements for its unionized employees, noting it has put forward “a significant offer” that includes wage increases, job security and improved benefits.

The Crown corporation also said its proposals did not contain demands for concessions.

Small businesses reliant on the agency for deliveries of goods and invoices, and for receiving payments, have already been harmed by ever-increasing costs for Canada Post services, and should not be expected to pay more, Kelly said.

“It’s time for Canada Post to bring its spending under control instead of handing growing costs on to consumers and businesses who are already facing postal rate hikes in January,” he said.

“We’re looking to both sides to be reasonable and come to a quick compromise.”

While many Canadians have found other ways to deliver letters and pay bills, over half of small businesses still pay each other by paper cheques sent through the mail, the CFIB said Monday, noting that almost two-thirds of firms reported sending more than 20 pieces of mail per month.

The CFIB recommended its members switch to using e-transfers to send and receive payments, and to consider using alternative shipping services to move their products.

“There’s nothing moving in Edmonton at all,” she said.

“All the trucks have been waved off and they’ve been respecting our lines – much appreciated.”

Federal Labour Minister Patty Hajdu said Monday she was monitoring the situation but gave no indication the Trudeau government would intervene to end the strikes expected to continue on Tuesday.

Both sides should remain at the bargaining table until a settlement is reached, Hajdu said.

“We always have back to work legislation in our tool box, (but) we’re not anticipating using that in the near future.”