DETROIT—Porsche has unveiled the long-awaited, highly-anticipated 2014 911 Targa, marking the return of the exceedingly popular hoop roof after a 17-year absence from the market.

Making its debut at the North American International Auto Show in Detroit, the Targa promises to appease the purists in its latest iteration as the German automaker returns to its removable roof roots with its first true Targa model since 1997.

Available in two models—the 4 and 4S—the Targa features a wide hoop bar in place of the B-pillars, a movable roof section above the front seats and a wraparound rear window without a C-pillar.

Unlike the original models, however, the roof segment on the new Targa can be opened and closed at the push of a button, stowing the roof behind the rear seats.

Based on Porsche’s Carrera 4 models, the Targa offers standard rear-biased PTM all-wheel drive and the the Porsche Doppelkupplung (PDK) gearbox. 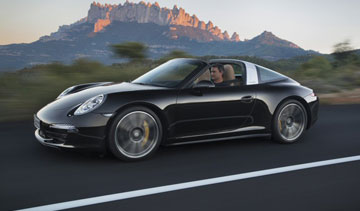 Step up to the top-of the-mark Targa 4S and watch the zero to 100 km/h time drop to 4.4 seconds thanks to a 3.8-litre boxer engine and 50 additional horsepower.