LOS ANGELES—Porsche says its first ever entrant in the hotly contested compact SUV segment will start around $54,000 when it hits Canadian showrooms in the spring.

Looking like a Volkswagen Tiguan back from a makeover in Milan, the all-new Porsche Macan is being dubbed “the first compact SUV that is also a sports car”—and with good reason.

Powered by a bi-turbo V6 engine, the entry level Macan S lays down a 0 to 60 mp/h time of 5.4 seconds, only about a second slower than the larger, top-of-the-mark, twin-turbo V8 sporting Cayenne Turbo S model.

Step up to the 400-horsepower Macan Turbo model and expect the 0 to 60 time to drop to within half a second of the Cayenne Turbo S at 4.8 seconds.

Using two variants of the same engine in both available models, the Macan S sports a 3.0-litre twin-turbo V6 that puts out about 340-horsepower, while the upgraded Turbo model gets a stroke increase of 83 millimetres to push the six-cylinder’s displacement to 3.6 litres.

Standard features on both models include Porsche’s double-clutch transmission (PDK) and an active all-wheel drive system that, while powered by a constantly-driven rear axle, can electronically transfer 100 per cent of the vehicle’s torque to the front wheels should the rears slip.

Staying under the vehicle, the Macan sheds its “also a sports car” moniker in favour of a bit of off-road capability.

Standard on both the Macan’s models, off-road mode can be activated by pressing a button in the centre console at speeds up to 80 km/h, adapting just about every relevant system to some fun off the pavement.

Shift pattern, front and rear torque split and accelerator pedal response are geared towards off-road conditions, according to Porsche, and the clutch is pre-tensioned to provide the front axle with the appropriate torque more rapidly.

Aesthetically, the Macan’s looks match its performance prowess, drawing on the 918 Spyder for inspiration.

Even the Macan’s steering wheel complete with shift paddles is modeled after the one found in the 918 Spyder.

A host of intelligent assistance systems are also available on the Macan, including lane departure warning and lane change assist, active cruise control (ACC) system with Porsche Active Safe (PAS) supports the driver by preconditioning the braking system should an impending hazard situation be detected. 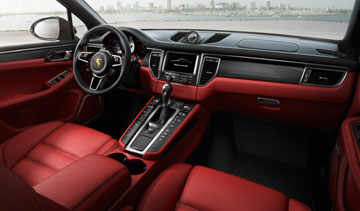 The Macan is also fitted with a multi-collision brake system that is triggered if airbag sensors detect an initial impact, at which point the system initiates maximum braking to a maximum deceleration force of 0.6 g.

The system slows the vehicle until it reaches 10 km/h.